In its latest ad campaign New Perspective Senior Living breaks away from senior housing ad stereotypes and goes for authenticity. 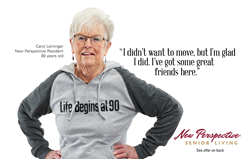 Our residents may be retired, but they are far from retiring, and this campaign reflects that.

In its new ad campaign New Perspective Senior Living breaks away from senior housing ad stereotypes and goes for authenticity. The campaign features actual residents talking about their concerns and the subsequent benefits of making the move to a New Perspective community.

“Advertising in the senior living business is typically a listing of features, stock photography and a building photo,” observed Doug Anderson, New Perspective Senior Living VP of Marketing, who took on the top marketing role for the company just over a year ago. “We wanted to convey a sense of a shared experience. We wanted seniors and their adult children to view these ads, and immediately realize our residents may resemble themselves and that their children would share the same sentiments. The seniors in our ads faced the same concerns many prospects do, and they ultimately feel great about their choice.”

The campaign features actual residents alongside call-out quotes addressing a specific benefit or “aha” moment they had after moving into a New Perspective residence. For Twin Cities resident, Margaret Willetts, it was about regaining a sense of belonging and independence: “It’s good to have people around my own age, and I am not dependent upon my kids. They can have their own lives and can be kids again.”

The campaign launched via regional print and direct mail in July. Response has been positive both in terms of leads and in regards to using actual residents, according to Anderson. Co-workers and clients at the hair salon in Milwaukee where 90-year-old Carol Leininger works two days a week were all abuzz when the campaign began running. “I walked into the salon (after the direct mail campaign hit), and I felt like a celebrity,” stated Leininger.

“Our residents may be retired, but they are far from retiring, and this campaign reflects that,” said Ryan Novaczyk, New Perspective Senior Living President and CFO. “They’re just like the rest of us. They’re not thinking about their age, they’re thinking about what they want to do next. And with our foundational belief that all seniors deserve to ‘Live Life on Purpose,’ helping them do exactly that is what we’re all about.”

Founded in 1998, New Perspective Senior Living (NPSL) is a family owned company that develops, owns and operates vibrant senior living communities in Minnesota, North Dakota, Wisconsin and Illinois. Its foundational belief — that all seniors deserve to Live Life on Purpose® and age with dignity — was forged from the personal experience of Founder and CEO Todd Novaczyk and his family. For seven years, they cared for his mother-in-law, Betty Berkeley in their home as she struggled to maintain her strong, independent spirit while coping with Alzheimer’s disease.

Today, New Perspective Senior Living operates 23 senior communities serving over 2,000 seniors through Independent Living, Assisted Living and Memory Care options, with a goal to be serving 10,000 seniors by 2025. Based in Eden Prairie, Minn., the company has won multiple awards including Top Assisted Living Facility, Best-of-the-Best Dining Experience and Top Workplaces. In addition, Todd Novaczyk, was recently profiled in the Senior Housing News, The Leadership Series, while Ryan Novaczyk was just named to 50 for the Next 50 by LeadingAge of Minnesota