“Come Along and See” details author Dan Rasmussen Jr.’s unforgettable journey from growing up in the Depression to fighting in the front lines of the Korean War. 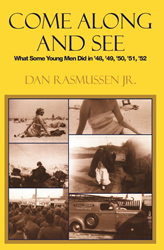 Dan Rasmussen was drafted into the United States Army at the age of 21, which swept him away from his dream job of working as a bill poster for Foster and Kleiser, the biggest advertising agency in Los Angeles at the time. The life of adventure he had while living in California would soon throw him into a new adventure as life as a soldier on the front lines of the Korean War.

The struggles and strengths of the Great Depression and war in America are relived in this thrilling second book, “Come Along and See,” by author Dan Rasmussen Jr. He takes readers on his real-life journey through what it was like as a young man in the pre-and post-World War II era, which ultimately led him to being drafted for the Korean War.

“As a young man, I didn’t anticipate the challenges that I would face as a soldier,” Rasmussen said. “The Korean War still haunts me and many people to this day, and through my book we honor those young men who fought for our country and sacrificed their lives.”

In “Come Along and See,” history buffs and readers alike will revel in Rasmussen’s tale of a life of adventure, sacrifice, and honor.

About the author
Dan Rasmussen Jr. is also the author of “Wholesale Blood,” which further details his struggles and experiences fighting as a soldier in the Korean War. Rasmussen grew up in Grand Island, Nebraska and moved to Long Beach, California when he was 18 years old, where he was living the dream. He currently resides in Richland, WA. Rasmussen’s wife passed away 5 years ago and they have two children together.