Celebrating the 50th Anniversary of the Film “The Endless Summer” - Brown Creates a Traveling History Book Filled with Memorabilia; Sharing the Behind the Scenes Adventures of the 1964 Global Trek in Search of the Perfect Wave 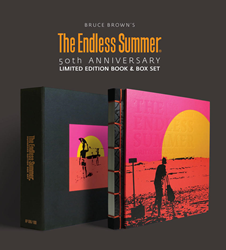 I always wanted to do a book like this but I didn't have anyone to take on the project until Manual Serra Saez came along. His thesis was so awesome we made him the Creative Director for the book. - Bruce Brown

Academy Award Nominee and film maker Bruce Brown has released his newest endeavor, The Endless Summer Book and Box Set which celebrates the 50th Anniversary of his iconic surf film The Endless Summer. Only 1,966 copies of the book will be available for sale commemorating the year of the film’s global release. The Endless Summer Book and Box Set comes with a remastered DVD of the movie, memorabilia saved from his trip i.e., personal letters, news clippings, critic reviews, theatre tickets, maps and a five-frame actual film strip from the original movie and more.

The Endless Summer Book and Box Set took over five years to make and was the inspiration of Manuel Serra Saez who had a passion for the sport and the movie. While attending the University EASD (school of Art and Design) in Spain, Saez created the book for his university degree showing the behind the scenes action of the film. He made two original ‘hand-made’ copies, turned one in for his grade and sent the other to Brown. Six months later, Saez was asked by Bruce Brown Films if he would like to be the creative director for the publishing of the book. Saez was flown to California and spent three months in Brown’s attic going through his personal collection, finding many items that had not been seen or unboxed for well over 40-years including photos, letters and items he used to further enhance The Endless Summer Book and Box Set creation.

In a section entitled, “In Their Own Words” each principle of the original movie wrote in their own words about the trip; Robert August, Mike Hynson, John Van Hamersveld, Bob Bagley, Robert “Wingnut” Weaver (the star of Endless of Summer II) along with members of the band The Sandals (who wrote the music for the movie), all write about what The Endless Summer movie meant to them, their experiences and how it has changed their life.

The book also dives into Brown’s innovation with cameras, his film making, and prior movies before he produced The Endless Summer including a piece about the movie he co-produced with legendary actor, Steve McQueen, titled On Any Sunday where Brown and McQueen received an Academy Award nomination for Best Documentary.

Franklin Joseph Publishing produced and published the book; it is the only collector’s book and box set ever created celebrating the history of the film. The book is written by Dana Brown, the son of Bruce Brown, and authorized by Bruce Brown Films, LLC.

Upcoming Events and Appearances Include:

"The Endless Summer Book and Box Set” can be purchased at http://www.EndlessSummerBooks.com.

Facts and Contents of The Endless Summer Book and Box Set:

Larry Lindberg, producer for ABC Wild World of Sports with Bruce Brown at the first launch of the Endless Summer Book and Box Set.

Black and white photo taken by Bob Bagley at Salt Creek Beach in 1964 that later became the art work for the iconic Endless Summer movie poster.

A young Robert August and Mike Hynson in 1963.