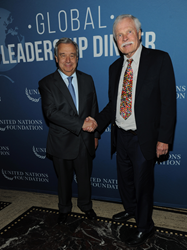 The evening’s event also marked the 20th anniversary of Ted Turner’s announcement of a historic $1 billion gift to UN causes, which he made at the Global Leadership Dinner in 1997. In recognition of this gift, Kathy Calvin, President and CEO of the UN Foundation said, “Ted could have put that $1 billion anywhere; instead he decided to put it to work through the United Nations to serve the world.”

See pictures from the event here. The honorees recognized at the event included:

Mars, Incorporated for the company’s commitment to the Sustainable Development Goals, through their Sustainable in a Generation Plan, which aims to protect the planet.

Ellie Goulding, Singer, Songwriter, and Record Producer for her commitment to climate action by championing efforts such as Earth Hour through the #MakeClimateMatter campaign and engaging children on climate change through Sesame Street.

United Nations Mine Action Service (UNMAS) in recognition of its inspiring and life-saving work over the past 20 years to mitigate the threats from mines and explosive remnants of war.

Senator Bob Corker the Chairman of the Senate Foreign Relations Committee for his leadership on an issue of critical importance to the United States and the UN: ending modern day slavery.

His Highness the Aga Khan for his leadership in global health, education, and the refugee crisis through the Aga Khan Development Network, as well his extensive work with the UN.

The Global Leadership Dinner is a unique event that brings together representatives from the diplomatic, business, government, philanthropic, media, entertainment, and social sectors. In addition to recognizing the work of the honorees in support of the UN, the event raises funds for the United Nations Association of the United States of America (UNA-USA), a UN Foundation campaign that works to inform, educate, and inspire Americans to support the UN.

“It’s an honor to receive this award for our support of the UN’s Sustainable Development Goals. We’re grateful for our partnership with the United Nations and the UN Foundation and, as we strive to do our part to build a more sustainable world for generations to come, continued collaboration will be critical.” — Grant F. Reid, CEO and President, Mars, Incorporated

“We have seen the horrors of slavery and trafficking around the world and we have met with victims first-hand. What we hope will happen is that the world community is going to get behind this effort [to end modern slavery]… This truly is a scourge on humanity.” — Senator Bob Corker, Chairman, Senate Foreign Relations Committee (via video)

“This very special award is not just a recognition of my own life and work at the United Nations. It is, most importantly, an acknowledgement of the incredible work, done daily by my colleagues, for the millions of people for whom the UN is, so often, their only means of survival. They work in horrendously dangerous conditions, defusing IEDs and unexploded bombs.” — Agnès Marcaillou, Director of the United Nations Mine Action Service (UNMAS)

“I am delighted to receive the New Voices award tonight. Thank you to the UN Foundation for this huge honour. I’m also excited that I will soon join the UN family as a Goodwill Ambassador for UN Environment. These opportunities will allow me to use my platform and reach to amplify the efforts of those working so hard and decisively to shape a positive future on our beautiful planet.”— Ellie Goulding, Singer, Songwriter and Record Producer

“I am also an enthusiastic supporter of the UN Foundation for another reason. What has caught my attention for many years is how closely its philosophy about global development actually parallels our own. The words that leap out of its mission statements include terms like “linking” and “connecting…” not only with the United Nations itself, but with a host of other organizations.

“It is with all of these thoughts in mind that I say again how proud I am to be here to accept your award - recognizing how it reinforces not only the important “words” but also the useful concepts, and indeed the central “values”- that we - all of us - hold in common.” — His Highness the Aga Khan