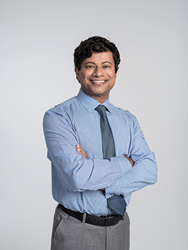 "I'm calling on all campaigns to take the same pledge as I did today not to accept or use candidate, business, or corporate PAC dollars or dark money in their attempts to run for office.

Michigan Democratic Gubernatorial Candidate Shri Thanedar today called for all gubernatorial campaigns to take a pledge not to accept contributions from candidate, business, and corporate backed political action committees (PACs) for the entirety of the 2018 election cycle.

"In the last few days, we’ve seen another sad example of the costly effects of the influence of corporate special interest money. A major problem with our electoral process is dark money from candidate, business, and corporate-backed Super PACs dominating the political landscape. It’s created a system that places profits over people, and this must end," Thanedar said.

"I'm calling on all campaigns to take the same pledge as I did today not to accept or use candidate, business, or corporate PAC dollars or dark money in their attempts to run for office," Thanedar said. "And I would ask all statewide candidates to join with me to stomp out dark money in political campaigns once and for all."

Thanedar, an Ann Arbor-based scientist and entrepreneur, announced his candidacy in June 2017.

“Wall Street needs to keep its nose out of political process so real people can best determine who the next leader of the state of Michigan will be,” said Brian Spangle, Thanedar campaign manager. “As examples, companies in the pharmaceutical, insurance, and energy industries across this state shouldn’t be calling the shots in this election – the voters should. Now more than ever, all real principled progressives need to take a stand against dark money and corporate special interest money.”

A recent expose that aired on the CBS television program 60 Minutes earlier this month showed that special interest influences in politics are stronger than ever, with dark money and state and federal lobbyists “owning politicians.”

For more information about Shri’s plans for Michigan, visit http://www.Shri2018.com.