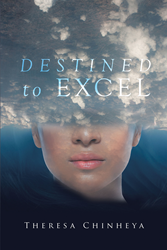 “Destined to Excel”: the Chinheya family’s story from their humble beginnings to their struggles and triumphs. “Destined to Excel” is the creation of published author, Theresa Chinheya, Zimbabwe native and world traveler.

“The Chinheyas and fellow tribesmen had settled on choicest land where the mountain slopes are lush with vegetation. There were numerous cold and hot water springs and gorges. When these native settled in the land, many generations lived in peace with neither intruders nor outside visitors. The families mainly survived on farming, hunting, and livestock… One day as villagers went on with their daily life, there were rumors that someone had seen some unfamiliar strange-looking people on horseback looking around the mountain valleys, and many wondered who those people could be and why they were here. The villagers didn’t have to wait too long before they found out what the strangers wanted.” --Theresa Chinheya

This personal narrative of author Theresa Chinheya starts with the story of her ancestors. The villagers of Chipinge, which is located in Zimbabwe’s Eastern highlands, struggle to understand how their ancestral land become the legal property of a new landlord. After years of working as a farm laborer to pay for the right to occupy a small portion of their homeland, one young villager decides to venture to the big city of Salisbury. He became the family’s pioneer for exploring foreign lands. Partson finds true love and marries his lifelong companion, Daina.

Author Theresa Chinheya is their eldest daughter. Blinded in the prime of her life, she struggled, but persevered. “Destined to Excel” carries readers through her journey from infancy to childhood, young adulthood to midlife as she travels to Tanzania, England, and the United States of America. “Destined to Excel” reveals the mysteries of divine intervention in the face of near catastrophic events. By the grace of God, she was miraculously saved from total destruction time and time again.

View a synopsis of “Destined to Excel” on YouTube.

Consumers can purchase “Destined to Excel” at traditional brick & mortar bookstores, or online at Amazon.com, Apple iTunes store, Kobo or Barnes and Noble.

For additional information or inquiries about “Destined to Excel”, contact the Christian Faith Publishing media department at 866-554-0919.