“Glory to Glory” from Christian Faith Publishing author James Golden retells God’s miraculous birth in the stable from the perspective of a young shepherd boy who witnesses the majesty of God’s incarnation. In a turn of events later in life, the shepherd gets into trouble with the law and meets a carpenter facing a similar fate. 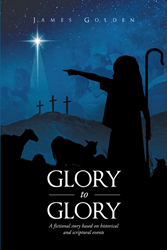 “Glory to Glory” is an imaginative tale of a shepherd boy who experiences God’s miraculous reincarnation as a young boy and joins in with the angelic choir singing God’s praise in the most awesome display of heaven’s glory. He grows up living a hard knocks life of a shepherd and strays. He ends up in a Roman prison facing execution and meets a carpenter facing a similar sentence.

“Glory to Glory” is the creation of published author, James Golden, a practicing dentist who lives in Georgia with his wife, Roxanne.

Golden shares, “Just imagine this for a moment. What if one of the shepherds at the manger in Bethlehem was a young boy learning to tend sheep? What if he experienced that cold, lonely night so long ago that we have been told was invaded by an angel announcing the most improbable news? What if an immeasurable multitude of an angelic choir joined that angel singing God’s praise in the most awesome display of heaven’s glory? What if he went along with the other shepherds to find the baby and his family in the stable and witnessed the majesty of God’s incarnation? What if he grew up like most shepherds of the day on the underside of life? What if the challenges of life caused him to stray a little? What if he wound up, a few short years later, in a Roman prison facing execution? And what if he met a carpenter facing a similar sentence in that Roman prison? How might his story have turned out? Read Jacob’s story and see how he experienced ‘glory to glory.’”

View a synopsis of “Glory to Glory” on YouTube.

Consumers can purchase “Glory to Glory” at traditional brick & mortar bookstores, or online at Amazon.com, Apple iTunes store, Kobo or Barnes and Noble.

For additional information or inquiries about “Glory to Glory”, contact the Christian Faith Publishing media department at 866-554-0919.