Author Floyd Sims’s Newly Released “21 Years Around the World” Is the Amazing Journey of a Man Who Has Experienced a Lifetime of Adventures and Then Some! 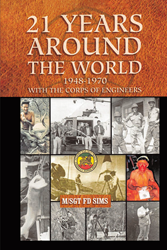 “21 Years Around The World” is the creation of published author, Floyd Sims. Sims graduated first in his class at Author Hill Trade School as an engine draftsmen. After two years of working at a local consulting firm, he joined the military in 1948 where he was quickly promoted to M/SSgt. Const. Surveyor at the age of twenty. He was the only one of that age to hold the honor for eighteen years. Floyd currently lives in Harrisonburg, Virginia with his wife of twenty years, Deanna. Even at the age of eighty-four and a lifetime of adventure, he still has a bucket list.

“On the twenty-sixth of July, I drove my 1946 Ford over to the recruiting office and signed on the dotted line. I was then bussed into Detroit where I took my physical examination and some written tests and got the usual medical inoculations against diseases, and on July 27, 1948, I was sworn into the Army of the United States of America, the start of this twenty-one years around the world.” --Floyd Sims

Sims was born in Edenville, Michigan during the Great Depression. By the age of eleven, he was driving by himself. After moving to Saginaw, Michigan, he maintained three paper routes and worked at a gas station when he was not working at the two bowling alleys where he set pins. After completing school and working at a local consulting firm, he joined the US military in 1948. Since then, he has crossed the equator twelve times. He has been to fifty-four islands from Iceland to the Caribbean to Bora Bora. He has also has been to thirty-one countries and counting.

He has swayed with the piranhas in the Amazon and the crocs in the Nile, woke with a tarantula in his tent, got hit by a scorpion, and experienced by a near miss by a rattlesnake. He drove the President of Panama and his two guards to the top of Tobago Island where he also met the President’s brother two years later. When the pair hit it off, they were soon hunting, fishing, and going to cockfights together. One evening, he had dinner just ten feet away from the emperor of Ethiopia. He was a guest at Panama’s Alcatraz Island, bought a bushel of shrimp for two packs of cigarettes from John Wayne’s shrimp boat fleet, and was the guest of honor at a small island in the San Blas Islands. He could have become a millionaire long before his time, if the casinos in Reno had not changed their rules. Despite a life full of adventure, he still has a bucket list.

View a synopsis of “21 Years Around The World” on YouTube.

Consumers can purchase “21 Years Around The World” at traditional brick & mortar bookstores, or online at Amazon.com, Apple iTunes store, Kobo or Barnes and Noble.

For additional information or inquiries about “21 Years Around The World”, contact the Christian Faith Publishing media department at 866-554-0919.