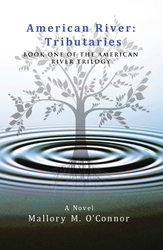 A writer and art historian has released the first novel in her debut historical fiction trilogy, which follows the interwoven stories of the descendants of three immigrant families as they struggle to build their legacies during the 1960s. In “American River: Tributaries,” author Mallory M. O’Connor unwinds a compelling yarn about the pursuit of art, music, culture and love and captures the essence of the 20th century American dream.

O’Connor’s book opens during the mid-1800s with comprehensive exposition on the McPhalan, Morales and Ashida clans as they settle along California’s American River, ultimately setting in motion the destiny of generations to come. As the novel jumps ahead to 1959, readers are introduced to the Civil Rights-era McPhalan family as its matriarch, Marian, embarks on a journey from her home at Mockingbird Ranch to follow her dreams of becoming an artist.

“The experiences of the 60s that I wrote about in this trilogy are things I observed first-hand – the Civil Rights Movements, the Women’s liberation Movement, the United Farm Workers Movement,” O’Connor said. “I watched John Kennedy’s funeral on TV, worked in the Bobby Kennedy presidential campaign and protested the Vietnam War. Interesting times – and all are referenced in American River.”

As members of the McPhalan become caught up in romantic entanglements with the descendants of the Morales and Ashida families, tensions mount and familial bonds fray. Through its address of era-specific issues, such as gay rights, women’s rights and immigration, O’Connor’s American River series takes readers on a journey through one of the country’s more notable decades for social justice and creative growth.

About the author
Mallory M. O’Connor is a writer, art historian and professor of art history emerita for Santa Fe College. O’Connor holds master’s degrees in both American history and art history from Ohio University. A life-long social justice advocate, her high school artwork often depicted migrant workers and the homeless, and she was part of the Women’s Strike for Peace during the 1960s. She currently resides in Gainesville, Fla. To learn more, please visit http://www.mallorymoconnor.com.