“Conversations with My Friend the Atheist” from Christian Faith Publishing author Richard Cannon is an insightful and thought-provoking analysis of why Christians should care about the Atheist viewpoint. In order to effectively respond one must understand what an Atheist believes, and why the Atheist believes as they do. 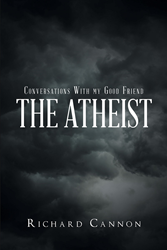 Published by Christian Faith Publishing, Richard Cannon’s new book is a thought-provoking and insightful examination of why Christians should care about what Atheists believe.

It is easy to discover what Atheists say about Christianity and Christians. Pick up a book by any modern Atheist writer, read a few random pages, and the reader will have a sampling of the criticisms Atheists have regarding religion and people of faith. A natural first response is the desire to set the record straight, but a person responding in this way will quickly find themselves going in circles. From the Christian’s perspective, it serves no useful purpose when Christians engage Atheists to attempt to set the record straight.

Atheism is a worldview, or a way of seeing the world. Just as the Christian sees their Christian faith as reasonable and rational, the Atheist has the same view of what they believe to be true. Atheists vary in their definition of what it means to be an Atheist. There are, however, common themes found in the beliefs of people identifying themselves as Atheists. It is common, for example, to find people identifying themselves as Atheists to believe the natural world is all there is. This, of course, excludes the supernatural and since God operates outside of nature, God is supernatural and is therefore eliminated in the thinking of Atheism.

View a synopsis of “Conversations with My Good Friend the Atheist” on YouTube.

Consumers can purchase “Conversations with My Good Friend the Atheist” at traditional brick & mortar bookstores, or online at Amazon.com, Apple iTunes store, Kobo or Barnes and Noble.

For additional information or inquiries about “Conversations with My Good Friend the Atheist”, contact the Christian Faith Publishing media department at 866-554-0919.