Daniel Z. Kelly’s Newly Released “The Genesis Revelation: Behold, I Give unto You the Keys” Is a Helpful Book That Focuses on Who God Is From Genesis to Revelation

“The Genesis Revelation: Behold, I Give unto You the Keys” from Christian Faith Publishing author Daniel Z. Kelly is an enlightening book that clearly explains God’s wonderful works and his everlasting love for mankind since the beginning, as written in the Bible. 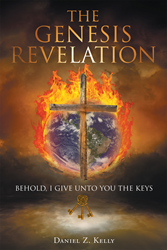 Kelly shares, “Jesus’s exemplary attributes and supremacy began in eternity pass when he stood out like Joseph among his brethren because he did always the things that pleased the Father. He demonstrated that he had a different spirit. And as it was then, God sought for one (as was previously mentioned) from the hierarchy of angels who would prove himself worthy to receive the title ‘Lord of lords’ (that is Lord of all things). The successful candidate would have to possess like qualities of holiness, power, love and purity in order to earn this coveted title. Him that was chosen, if he must truly have preeminence, would have to come to earth in the form of man to live as the expressed image of the Father and overcome all things, that through him (that is, by his words and actions) the people might be saved from their sins. However, there was none found worthy to do this except Jesus, who proved that there was no other good enough to be the ambassador, the Emanuel, the Messiah and the Savior of the world except him.”

Published by Christian Faith Publishing, Daniel Z. Kelly’s new book encourages readers to accept the Lord as their personal Savior and to seek understanding of God’s Word so that they will be able to further appreciate God and live life in ways that please him.

The author also gives the Bible-based keys to unlock God’s mysteries and avoid lack of knowledge, a condition that makes people stuck in spiritual captivity.

View a synopsis of “The Genesis Revelation: Behold, I Give unto You the Keys” on YouTube.

Consumers can purchase “The Genesis Revelation: Behold, I Give unto You the Keys” at traditional brick & mortar bookstores, or online at Amazon.com, Apple iTunes store, Kobo or Barnes and Noble.

For additional information or inquiries about “The Genesis Revelation: Behold, I Give unto You the Keys”, contact the Christian Faith Publishing media department at 866-554-0919.