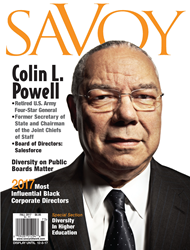 We continue to be inspired by these accomplished executives, their distinguished careers and the corporations that demonstrate inclusive board composition in Savoy.

Savoy Magazine announced the release of their 2017 Power 300: Most Influential Black Corporate Directors listing in the upcoming fall issue.  Savoy’s fall issue features a directory of 300 directors serving on the boards of publicly held companies. As the leading business magazine reporting on African American success and achievement, Savoy’s Most Influential Black Corporate Directors edition is the most comprehensive listing of African-American executives, influencers and achievers contributing leadership to corporate boards.

“Savoy is committed to providing comprehensive coverage of African Americans recently selected to serve on their first public board and those that are currently serving on public boards.” said L.P. Green, II, CEO & Publisher of Savoy Magazine. “We continue to be inspired by these accomplished executives, their distinguished careers and the corporations that demonstrate inclusive board composition in Savoy. We offer congratulations and appreciation to the directors recognized in Savoy’s Most Influential Black Corporate Directors edition for their leadership. “

Serving as our cover story, Colin Powell has one of the most impeccable careers in government and military history. Powell has served as a four-star general, national security advisor, chairman of the joint chief of staff and secretary of state. Powell currently serves on the corporate board of directors for Salesforce. In Savoy’s exclusive profile, Powell’s distinguished career, commitment to service and unwavering integrity and legacy is examined in detail.

At over 300 pages, the Savoy fall 2017 issue is the second largest magazine ever produced in our publishing history. Inside, we highlight Simone Askew’s selection as the first black woman to lead the Corps of Cadets at West Point, Viacom’s new Multi-Year Content Partnership with Tyler Perry, Russell Westbrook’s new collaboration with luxury luggage manufacturer TUMI, and more.

Savoy Magazine is a national publication covering the Power, Substance and Style of African- American lifestyle. From entertainment to sports, business to politics, design to style, Savoy is a cultural catalyst that highlights timely topics and drives positive dialogue on and about Black culture. Savoy is published quarterly with a worldwide distribution via subscriptions and newsstands.