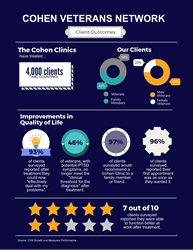 “Our data shows that CVN clients are getting better and we are reducing barriers to care such as long wait times,” said Dr. Anthony Hassan, President & CEO of the Cohen Veterans Network.

The Cohen Veterans Network has unveiled plans for its next three mental health clinics. Steven A. Cohen Military Family Clinics in Denver, CO, Killeen, TX, and Clarksville, TN, will open by March of 2018.

The existing Cohen Clinics have treated more than 4,300 clients at no cost to date, with strong improvement and satisfaction results. More than 40% of clients have been non-veteran military family members, including spouses and children. Ninety-three percent of CVN clients surveyed recently report after treatment they could now “effectively deal with my problems,” while 96% percent report getting a first appointment when they want it.

“Our data shows that CVN clients are getting better and we are reducing barriers to care such as long wait times,” said Dr. Anthony Hassan, President & CEO of the Cohen Veterans Network. “We are employing lessons learned and are moving to help even more veterans and military families with additional locations early next year.”

The network has seven clinics currently in operation, including three in Texas: El Paso, San Antonio, and Dallas, as well as Fayetteville, NC, Washington, DC, Philadelphia, PA, and New York, NY. The network formally launched in April of 2016 behind a $275 Million commitment from founder Steven A. Cohen.

“It was good to find this place. It’s life changing,” said Army veteran Matthew. “I’m less aggressive now, less angry. I’ve noticed that, my girlfriend has notice that, and even my family back home has noticed.”

The network is also honoring the many veterans employed at the Cohen Clinics this week in a video series leading up to Veterans Day.

“CVN takes pride in our cultural competency, in that we speak the same language, know the acronyms and slang, and understand the challenges transitioning military families are facing,” Hassan said.

ABOUT THE COHEN VETERANS NETWORK