How Experts in AI and Blockchain Technology Are Joining Forces to Help Us Reclaim Our Personal Data and Create a New, Data-Driven Economy 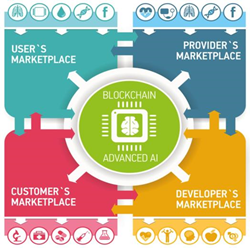 We’re creating more than a new marketplace. We’re talking about the creation of a data-driven economy where people in the poorest nations will sustain their families by selling their personal data

It's a fact of life in our booming digital economy. The world’s largest technology companies, all with Websites we visit and apps we launch every day, including Facebook, Google, and Amazon, amass huge quantities of our personal data. They all profit from it by leasing or selling it - often to multiple data brokers - for millions of dollars. It's a lucrative business for so-called "data privateers" but not for us even though it's our data they're selling.

But there are two tech companies – Insilico Medicine and The Bitfury Group – that have no plans to capture and resell our personal data. In fact, they plan to upend the industry’s current payment paradigm, send data privateers packing, and return personal data to its original owners – us.

"We plan to turn the data management industry on its head,” said Dr. Alex Zhavoronkov, founder and CEO of Insilico Medicine. “Every year, we spend more time managing work, our families, and our lives online. Every digital transaction, exchange of value, goods, and services, doctor visits, and even the prescriptions we pick up at our neighborhood pharmacy add value to our digital profile. Unfortunately, we don’t own our increasingly valuable profile. That’s going to change!”

In a peer-reviewed research paper released this week, industry-leading scientists from Insilico and Bitfury lay out their ambitious plan to create the world’s first blockchain-based, personal data marketplace powered by artificial intelligence (AI). The marketplace, to be created using the distributed ledger of blockchain, the underlying technology that powers crypto assets such as Bitcoin, will make it possible for people to take control of their personal data and even profit from it by licensing or selling it to different companies in different industries.

Data brokers interested in buying an individual’s shopping preferences, blood type, or even prescription drug history (if consumers are willing to sell this sensitive information) must make a crypto currency payment to the user before they can claim ownership of the data “The user will be in control, deciding who they want to share their data with and under what terms,” said Zhavoronkov. The platform will have its own type of crypto currency, called a “Lifepound”, that will allow the consumer to exchanges payments made for their data for other goods and services.

How much will your personal data be worth on the platform? While some retail companies have already made it clear they’ll pay between $50 to $500 month for your personal shopping data, the price tag for countless other data points, including financial and healthcare, will be determined in the marketplace.

Experts believe the most lucrative payments will be made to individuals willing to selling their biological or genetic data. 23andMe, the company that offers personalized genetic reports from a spit swab for $99, was paid $60 million by genetic researchers to access the DNA profiles of its 800,000 customers. The payment underscores the growing value of personal, genetic information, whether it’s sold by a centralized company or by individuals who, for the first time, will be able to monetize their personal data.

Zavoronkov believes as the marketplace and the monetary value of personal data grows, individuals living in the poorest nations will make a sustainable living by selling or licensing their genetic code and other increasingly-valuable personal information. “This is what we’re most excited about,” exclaimed Zhavoronkov. “We’re creating much more than a marketplace, we’re talking about the creation of a new, data-driven economy where people in the poorest nations can make enough money to sustain their families by selling their personal data.”