Denver Zoo Sumatran orangutan Nias is pregnant and receiving great care from the Zoo’s animal and veterinary staff. The baby, due in late March, will be the second baby for Nias, and the fourth orangutan to ever be born at Denver Zoo. 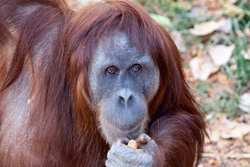 Denver Zoo orangutan Nias is pregnant with her second baby.

“Nias’ last pregnancy was successful, though it took a lot of effort to help Nias learn to breastfeed,” says Denver Zoo Associate Veterinarian Dr. Gwen Jankowski. “We are monitoring her closely and are happy with what we see so far in this pregnancy.”

Denver Zoo Sumatran orangutan Nias (NEE-uhss) is pregnant and receiving great care from the Zoo’s animal and veterinary staff. Zookeepers believe the baby will be born around March, based on the changes of her body and when she was observed to be breeding with her new mate, Berani (buhr-AH-nee). Orangutan pregnancies last about nine months. This will be the second baby for Nias, and the fourth orangutan to ever be born at Denver Zoo.

Nias’ caretakers say the pregnancy is going well and monitor her progress with regular ultrasounds and weight checks. Zookeepers also feed her prenatal vitamins and train her for where to go and what to do when she actually gives birth. So far, though, she is in excellent health and the baby seems fine.

“Nias’ last pregnancy was successful, though it took a lot of effort to help Nias learn to breastfeed,” says Denver Zoo Associate Veterinarian Dr. Gwen Jankowski. “We are monitoring her closely and are happy with what we see so far in this pregnancy.”

Nias welcomed her first baby, a female, named Hesty, (HEHSS-tee) in June 2010. She was the first orangutan birth at Denver Zoo in 25 years. While the birth, itself, was normal, the following weeks were difficult, as Nias did not know how to nurse her newborn. Zoo staff stepped in to bottle feed the infant and were forced to place her in an incubator before both mother and baby learned how to successfully nurse. Zookeepers believe now that Nias is an experienced mother, this should not be an issue with her new arrival.

Nias was born at the San Diego Zoo in July 15, 1988, and came to Denver Zoo from El Paso Zoo in November 2005. Berani was born at Florida’s Zoo Miami on February 15, 1993, and arrived at Denver Zoo from the Audubon Zoo, in New Orleans, Louisiana, this past June. The two were paired under recommendation of the Association of Zoos and Aquariums’ (AZA) Species Survival Plan (SSP), which ensures healthy populations and genetic diversity among zoo animals. The coupling has already proved to be an excellent match, as the two only met in July, and conceived their baby shortly afterward.

Orangutan means “person of the forest” in the Malay language and the species is among the closest relatives to humans. Physically they are known for their stout bodies, long arms and shaggy, red hair. The orangutans at Denver Zoo can often be seen showing off their arboreal talents, swinging from ropes and trees in their expansive habitats.
Sumatran orangutans are classified as “critically endangered” by the International Union for Conservation of Nature (IUCN), with a wild population estimated at 14,600 individuals. Only found on the island of Sumatra, in Indonesia, their survival is seriously threated by habitat loss stemming from logging, mining, forest fires and timber clearing for agriculture, including palm oil plantations, and human settlements.

Denver Zoo has previously worked to conserve orangutans in their historic range. In 2010, staff and partners traveled to Indonesia to visit two centers where orangutans were confiscated as illegal pets or displaced by fire and palm oil plantations. Not all of the orangutans could be rehabilitated due to health reasons, but Zoo staff members tried to help keep them healthy and comfortable by providing their expertise, medical supplies and enrichment devices. They also helped repair broken facilities and built shelters to shield the orangutans from rainfall.