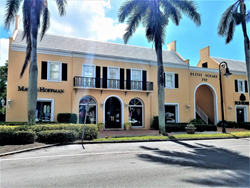 Pettit Square, located at 292-296 14th Avenue South, is one of several properties purchased by Hoffmann Commercial Real Estate, the largest owner of commercial properties in Naples.

“The addition of these properties is the evolution of our major commitment to Naples." -- Greg Hoffmann, CEO of Hoffmann Commercial Real Estate.

Expanding its presence as the largest owner of commercial properties in Naples, Hoffmann Commercial Real Estate has purchased two new properties and placed an additional four new addresses in downtown Naples under contract with plans to close by the end of January 2018. Once these acquisitions are completed, the company will own 21 properties in the city, concentrated in the prestigious South Naples retail district and valued in excess of $250M and growing.

Acquiring large segments of targeted districts supports a prevailing company goal: the creation of attractive, welcoming retail neighborhoods where local businesses can flourish. The company prides itself on upgrading vintage properties, maintaining local character and enhancing public spaces to attract shoppers for tenants. Enhancements in Naples include the addition of a sculpture walk near Hoffmann properties in the Fifth Avenue and Third Street areas, a live music series, and sponsorship of the Slidr shuttle service that provides free rides to shoppers around downtown.

“The addition of these properties is the evolution of our major commitment to Naples,” notes Greg Hoffmann, CEO of Hoffmann Commercial Real Estate. “These are outstanding properties that complement our existing holdings. We look forward to the opportunity to revitalize Third Street South, and link it with our holdings near Fifth Avenue South to position Old Naples as a leading shopping and dining destination.”