A plan to overthrow the government in "2017" 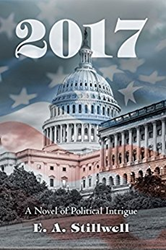 While our country is unique in many ways, it is not impervious from the unthinkable.

The author of “Deceptions,” “Odyssey of the Heart” and “From Olympus” shines a spotlight on the government in his new novel.

In “2017: A Novel of Political Intrigue,” E.A. Stillwell provides a political thriller about conspiracies, hidden agendas, love affairs and overthrowing the government.

“While our country is unique in many ways, it is not impervious from the unthinkable,” Stillwell said. “What happened in the book could actually happen.”

An avid world traveler, Stillwell credits the various cultures, countries and people he has met as inspirations for his book. It addresses such current political references as media duplicity, an attempt at inaugurating the first female president of the United States, and voter fraud.

“I used to live in Maryland, where there were a couple of counties that had more registered voters than population,” Stillwell said. “We had a gubernatorial candidate who lost the general election because 5,000 dead people voted. Not far from my current home, there was a county where 143% of the electorate voted. Talk about new math!”

For more about Stillwell or his books, visit http://www.eastillwell.com.

About the author
E.A. Stillwell first caught the writing bug in college, but realized he could not write about life if he had not lived it. After a lengthy career as an architect, Stillwell is happy to be nurturing his passion for writing, once again. He and his wife are avid travelers, who divide their time between homes in Mexico and Florida. This is his fourth book. To learn more about the author and his books please visit, http://www.eastillwell.com.