Autonomous Solutions, Inc. Works with Enaex to Expand its Mobius for Mining Platform to include Blasting Functionality

Autonomous Solutions, Inc. will work with Enaex to expand its autonomous command and control software, Mobius, to include blasting functionality. 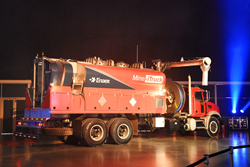 "Mobius continues to expand its role as an integration software platform for autonomous mobile equipment, enabling them to work together within an autonomous mining environment. We are excited to add blasting equipment to that growing list with the involvement of Enaex."

“Mobius continues to expand as an enabler of autonomous applications in mining,” said Drew Larsen, Director of Business Development for ASI Mining. “It’s expanding its role as an integration software platform for autonomous mobile equipment, including haul trucks, dozers, drills, etc., enabling them to work together within an autonomous mining environment. We are excited to add blasting equipment to that growing list with the involvement of Enaex.”

Steps were taken to ensure the autonomous blasting solutions meet all required safety, operational and availability standards, given the high risk of danger for both workers and equipment.

“These projects were specially created to further enhance the mining operation and its resources by taking care of our greater value, which are people,” said Juan Andrés Errázuriz, CEO of the Enaex Group.

Enaex announced the joint robotic effort at a recent event highlighting Mine-iTruck, a “mobile manufacturing unit,” using teleoperation and autonomous features that operate the vehicle autonomously inside an open pit mine. This development is part of an ecosystem of teleoperation and autonomous units that will allow Enaex to improve workers’ safety by using technology to perform tasks on risky mine environments from a safe location.

About Autonomous Solutions, Inc.
Autonomous Solutions, Inc. is a world leader in vehicle automation. ASI’s Mobius platform provides an OEM-agnostic, interoperable command and control software solution for autonomous vehicles. Mobius enables mine operations to integrate a variety of mining based vehicles under a comprehensive platform. ASI's robotic hardware and software systems allow users to safely manage their entire fleet of vehicles autonomously. We serve clients in the mining, agriculture, automotive, government, and manufacturing industries with remote control, teleoperation, and fully automated solutions, all from our headquarters and 100-acre proving ground in northern Utah.

ASI's vehicle automation products can be found in companies and government agencies throughout the world, including Anglo American, Rio Tinto, Ford Motor Company, Case New Holland, General Dynamics and others.

About Enaex
Enaex, a subsidiary of the Sigdo Koppers Group, has over 96 years of experience in the explosives market. It is the third largest producer of ammonium nitrate in the world, the leader in blasting services in Chile and Latin America and the first company in the world that is actively developing a complete robotized solution for blasting. Enaex’s mission is to become the most prestigious company in its industry and deliver first class blasting solutions in the most important mining regions of the world.

Image of a stemming truck on course in ASI's Mobius software