With Over 20,000 Customers, Swiftic Launches Their Powerful Branded App Platform For Social Influencers 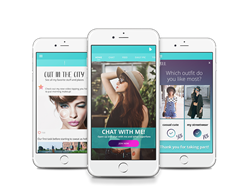 Swifitic, a leading mobile app-creation solution for brands and businesses is now rolling out Swiftic.io, a platform which allows social influencers to effortlessly create and publish their own branded app, powered by unique features designed to help them engage and monetize their social activity.

Today’s social influencers are a key factor in how global brands increase their marketing reach with targeted demographics. In fact, when it comes to having an effect over what products and services people purchase, the power of word of mouth is unmatched. This is true especially with millennials, yet content creators are often held back from unleashing their full influential potential due to limitations imposed by social networks.

Swiftic.io’s mission is to deliver a branded app creation platform focused on social influencers, allowing them to maximize their social brand’s reach and value, while owning the social assets they work so hard to create.

Among Swiftic.io’s popular content creators is music artist Lenay Chantelle Olsen, best known for her YouTube channel ‘Lenay Music’ which boasts an impressive 4.5 million subscribers on her Spanish channel, as well as an additional 640K subscribers on her English channel.

From the influencer’s perspective, standing out in a sea of content creators is becoming increasingly challenging as more and more people take to the web’s most active social channels to share their passion. Launching a personalized
branded app with Swiftic.io allows social influencers to stand out above the social noise while increasing their engagement with their loyal fans. Additionally, Swiftic.io creates new monetization opportunities for social influencers, such as launching their own mobile storefront, using affiliate links, charging a subscription fee for exclusive content, product campaigns, and most importantly access to data.

“Data is power, making social influencers who truly understand their audiences far more valuable to today’s top brands.” Shared Yoav Adomi, Swiftic.io’s Co-founder and CEO. “By taking advantage of Swiftic.io’s feature rich platform and analytics, social influencers now have a better understanding than ever before about who their followers are, allowing them to create campaigns focused on their fans main interests.” He said.

Swiftic.io opens a new world of branded marketing opportunities for brands and businesses, by tapping into the power of ‘word of mouth’ marketing that only social influencers and micro-influencers can deliver, while creating trackable campaigns that are accurately measured, taking the guess work out of social influencer marketing initiatives.

In this initial phase of the launch, Swiftic.io is inviting social influencers to take part in their closed beta phase, and get early access to Swiftic’s powerful branded app platform by visiting - http://www.swiftic.io