Is World Peace still possible despite the new missile launch by Kim Jong-un?

“Yes, it is ours for the taking if we start to realize how we can use Quantum Physics to our benefit,” states Dutch author Annelies George, adding that it still might take some time before a change will be noticeable. With the release of her new book Quest to the Unknown and the promotion of her initiative Loveable Light, George wants to make people aware that World Peace is not a utopia. 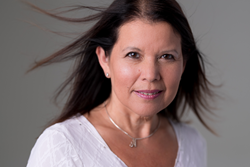 If we know how to use Quantum Physics correctly, we can turn the world in the long run into a peaceful environment to live in.

George, a finance professional with management positions in companies such as Cisco and Hewlett Packard Enterprise, discovered that the collective awareness of the human mind shows close similarities with the way Quantum Physics works. It motivated her to write the Jessie Golden Series, of which the first part (Quest to the Unknown) was recently released. This week she launched a video on social media, explaining how we can achieve World Peace by using science.

“It all started when I joined a Munay-Ki workshop, to gain some more insight in the initiations and philosophy when doing research for my books,” George says. “Suddenly I realized why ill minded spirits are able to influence large groups of people.”

“Throughout history people with bad ideas and thoughts have been able to influence other people,” George explains. “Usually the latter group of people was not in their right head due to circumstances such as the effects of an economic downturn. Strong minded characters took advantage of that.”

As an example George mentions Hitler.
“People were a little of their game due to the crisis and absorbing what he was stating,” she says, referring to the working of Quantum Physics. “It reached a critical mass and within no time he was able to get an entire nation behind him.”
The same is currently happening with the recruiting of people by terrorist groups.
“If Quantum Physics works for ill minded people, it should also work for positive behavior,” she concluded.

As the saying goes, it is a case of putting your own house in order first. George launched the Loveable Light initiative (http://www.loveablelight.com) with some activities taking place. In parallel she started to write a series of fiction books (The Jessie Golden Series) to alert people about the effects of Quantum Physics among other topics.

The video “Loveable Light 2017” and “World Peace enabled by Quantum Physics?” can be found under the media section of her webpage: http://www.anneliesgeorge.com/media-kit-annelies-george/. It also contains an interview video with the title “Is Life on Earth about to be Changed?” in which George is giving her view on the coherence between terror acts, the current state of the world and the increasing natural disasters.