Man Wrongfully Condemned to Life In Prison As Drug Kingpin Gets License to Practice Law: Curtis "50 Cent" Jackson to Produce TV Series Based Upon His Life

Isaac Wright, Jr., wrongfully convicted and sentenced to life in prison for being a drug kingpin was sworn in as a licensed attorney and has signed a deal with rapper/actor/producer Curtis “50 Cent” Jackson to produce a TV series based upon his life—a fitting complement to an incredible and unbelievable story of adversity, survival and success. 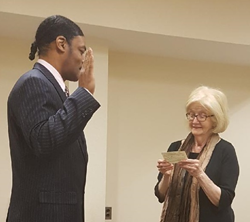 I went to law school for one reason and one reason only... To slay giants for a price. And if the giant is big enough and the cause is important enough, I’ll do it for free, especially when it involves helping those who cannot help themselves.

Wright was arrested and charged with running one of the largest drug distribution networks in the New York, New Jersey metropolitan areas. He was tried and convicted in 1991 under New Jersey’s drug kingpin law and was sentenced to life in prison.

Teaching himself the law while incarcerated, Wright represented himself at trial and on appeal, embarking on a legal fight that culminated in his exoneration after spending over seven and a half years in New Jersey’s maximum security prison. After his release from prison, Wright spent another seven years pursuing a law degree, obtaining his undergraduate degree in 2002, entering law school in 2004 and graduating from Saint Thomas University School of law in 2007 with the honor of having the law school’s cafeteria adorn his name. Passing the New Jersey Bar in 2008, he spent the next nine years being investigated by the New Jersey Bar’s Committee on Character before being granted admission to the bar by the New Jersey Supreme Court on September 27, 2017. Upon his swearing-in, Wright became the first and only person in U.S. history to be condemned to life in prison as a drug kingpin, secure his own release and exoneration and then be granted a license to practice law by the very court that condemned him. This uniqueness is highlighted by the way in which Wright achieved his release and exoneration.

Attorney Gilbert G. Miller, the assistant prosecutor appointed to oppose Wright’s appeals and other court action, said it best: “I found Mr. Wright to be highly intelligent and…a better brief writer than most attorneys I have encountered. I was most impressed with Mr. Wright’s ability as a legal strategist. Mr. Wright developed the legal strategy and authored a defense pro se brief in an attack on the king-pin jury instruction in State v. Alexander, 136 N.J. 563 (1994). Mr. Wright’s arguments prevailed in Alexander. Mr. Wright used his success in Alexander to have his own king-pin conviction reversed” in State v. Wright, 143 N.J. 580 (1996).

The Kingpin reversal got rid of Wright’s life sentence but he remained in prison on numerous other convictions with sentences totaling over 70 years. Wright’s ultimate release came as a result of his cross-examination of veteran police detective, James Dugan, during an evidentiary hearing in 1996, convincing Dugan to break the code of silence and confess.* Dugan’s confession opened revelations of wide and systematic misconduct and cover-up in Wright’s case. Then Somerset County Prosecutor, Nicholas L. Bissell, Jr., who tried Wright’s case personally was fingered as being the orchestrator of that misconduct, directing police officers to falsify their police reports while he personally dictated the false testimony of witnesses against Wright and made secret deals with defense attorneys to have their clients lie to the jury that Wright was their drug boss and that they had pled guilty and was going to prison, when in-fact, they were never going to spend a day in jail.

Dugan pled guilty to official misconduct in order to escape prison. Wright’s trial judge, Michael Imbriani, was removed from the bench and sent to prison on theft charges and Bissell, after learning of Dugan’s confession on TV news, took flight with federal authorities in pursuit. As police were kicking in the door of his Las Vegas hotel room, Bissell put a revolver to his head and pulled the trigger, committing suicide. Wright’s remaining convictions were vacated and he was immediately released from prison. The charges were dropped and the case against him dismissed.

Now entering the legal profession as a licensed attorney who was once condemned to life in prison, Wright provides a specialized talent based upon unique experiences and abilities that no other attorney can offer their client. “I went to law school for one reason and one reason only,” Wright says. “To slay giants for a price. And if the giant is big enough and the cause is important enough, I’ll do it for free, especially when it involves helping those who cannot help themselves.”

Wright is currently Of Counsel with the law firm Hunt, Hamlin & Ridley located in Newark, New Jersey and is quickly becoming one of the most sought after attorneys in the country for transactional representation in entertainment and finance as well as for criminal, civil and corporate litigation.