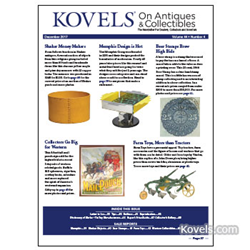 Kovels On Antiques & Collectibles Vol. 44 No. 4

Everyday objects made by the Shakers sold for high prices and are featured in a sale report in Kovels on Antiques & Collectibles December 2017 newsletter. More than 60 lots that were part of a single collection were offered at the Massachusetts auction, where an oval four-finger box auctioned for $12,000 and a simple tacked maple dry measure brought more than $10,000. Pictures and additional prices prove that form follows function with Shaker antiques. Collectors went big for Western at a three-day auction in Michigan with over 2,000 lots of Western-related merchandise. Advertising items picturing idealized images of people, landscapes, and adventure were popular and the top lot was a seven-foot lithographed Mail Pouch Tobacco sign that brought $29,000. Find other Western clothing and advertising in Kovels’ December newsletter.

A selection of glass, ceramics, jewelry, and furniture by the Memphis Group, an Italian design and architecture collective that worked in the 1980s, was offered at three fall New Jersey auctions. Memphis design pushed the boundaries of modernism, and Kovels’ December newsletter pictures unique glass pieces along with an enameled metal vase and the top lot, a Sottsass bookcase that sold for more than $26,000. Farm toys have perennial appeal and examples from the early 1900s were auctioned in Pennsylvania. See cast iron toy tractors, farm accessories, and some figures of the workers and horses that go with them in Kovels’ latest issue. And learn about beer tax revenue stamps, a little-known area of stamp collecting, in Kovels’ latest issue. A New York auction included over 150 beer stamps where prices ranged from the low hundreds to over $50,000.