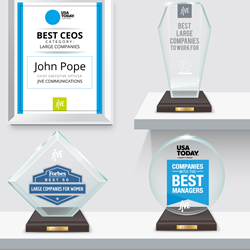 ...to be ranked among greats such as Marc Benioff of SalesForce and Tim Cook of Apple is out of this world.

Jive Communications announced today that they ranked in the top 20 on both USA Today’s and Business Insider’s Best Places to Work and Top CEOs list for large companies. The list was derived from Comparably—a compensation, culture, and career-monitoring website. Ranked six out of 50, John Pope of Jive Communications is the highest-ranked private company CEO. Jive also ranked number 20 out of 50 on USA Today’s list of Best Places to Work, number 21 out of 50 on their list of Best Managers at Large Companies, and number 24 out of 50 on Forbes’ list of Best Companies for Women.

The lists determined the best-ranked companies and CEOs using anonymous and public employee ratings on Comparably.com. Honorees are separated by large (500 or more employees) and small-to-midsize (less than 500 employees) companies. Other award recipients ranked alongside Jive include SalesForce, HubSpot, Intuit, LinkedIn, and Microsoft.

“To be rated as a top CEO by my employees is perhaps the greatest honor I can receive,” said John Pope, CEO of Jive Communications. “And to be ranked among greats such as Marc Benioff of SalesForce and Tim Cook of Apple is out of this world. I’m so proud of the whole Jive team and how far we’ve come. As we continue to grow as a company, I hope we can remain a great place where our employees love to work.”

“The CEOs included in Comparably’s annual Best CEOs list were the highest-rated leaders across thousands of CEOs,” said Jason Nazar, CEO of Comparably. “Most notably, this award came directly from the contribution of the CEOs’ own employees—across multiple dimensions, from a diverse talent pool of various departments, genders, and backgrounds. It’s an honor to be included in the 2017 Best CEOs list, and reflective of the great teams and company cultures these leaders have helped to foster.”

About Comparably
Comparably is a compensation, culture, and career monitoring website that aims to provide the most accurate and comprehensive data, to understand employees' true values and needs to make work better.