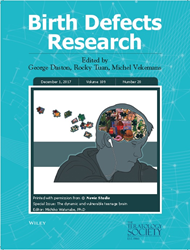 The popularity of energy drinks and junk food might have unique risks for teenagers who consume too much of them during the later stages of brain development. These are just two of the factors potentially affecting teen brain development examined in a new special issue of Birth Defects Research: The Teenage Brain, published by the Teratology Society with John Wiley & Sons.

The scientific journal issue released today (see the Overview, doi: 10.1002/bdr2.1181) includes “Taurine, Caffeine, and Energy Drinks: Reviewing the Risks to the Adolescent Brain (DOI: 10.1002/bdr2.1177),” a team at Northern Kentucky University, headed by lead author Christine Curran, PhD, and her co-author Cecile Marczinski, PhD. According to Dr. Curran, not only is the rise in energy drink consumption (often mixed with alcohol) among teens alarming, but so are animal studies showing its effects on brain development. “Our review indicates that we don’t know enough about the effects of high consumption of energy drinks and the ingredients found in them at this critical time in mammalian brain development,” she said. “Our recent findings in adolescent and young adult mice exposed to high taurine levels indicate there can be adverse effects on learning and memory and increased alcohol consumption in females.”

Another review (DOI: 10.1002/bdr2.1173) included in the special issue examines junk food, which is defined as “highly palatable and rewarding, but nutritionally poor.” According to lead author, Amy Reichelt, PhD, at RMIT University in Melbourne, Australia, junk food is not only found to be bad for waist lines, but also bad for the teen brain. “Because key neurotransmitter systems in the brain responsible for inhibition and reward signaling are still developing during the teen years, existing primarily on junk food could negatively affect decision making, increase reward-seeking behavior and influence poor eating habits throughout adulthood,” said Dr. Reichelt.

“One piece of good news is that exercise might be the answer to steer teens away from certain exposures,” explained Michiko Watanabe, PhD, co-editor of the special Birth Defects Research issue and professor of pediatrics at Case Western Reserve University School of Medicine. According to two other reviews included in the issue, “Exercise, Cognition, and the Adolescent Brain(DOI: 10.1002/bdr2.1178)” and “The Neurobiology of Substance Use on the Adolescent Brain and Putative Therapeutic Effects of Exercise (DOI: 10.1002/bdr2.1182),” exercise intervention may prevent long-term effects of adverse exposures in teens, but the majority of teens aren’t exercising enough. “The long list of exercise benefits could motivate teens to get off the sofa,” Dr. Watanabe added.

About the Teratology Society
The Teratology Society, an international professional group of scientists hailed as the premier source for cutting-edge research and authoritative information related to birth defects and developmentally mediated disorders, publishes Birth Defects Research with John Wiley & Sons. The Teratology Society is made up of more than 700 members worldwide specializing in a variety of disciplines related to birth defects research, including developmental biology and toxicology, reproduction and endocrinology, epidemiology, cell and molecular biology, nutritional biochemistry, and genetics as well as the clinical disciplines of prenatal medicine, pediatrics, obstetrics, neonatology, medical genetics, and teratogen risk counseling. Scientists interested in membership or attending the Teratology Society’s Annual Meeting in Clearwater, FL June 23 – 27, 2018 are encouraged to visit http://www.teratology.org.
# # #