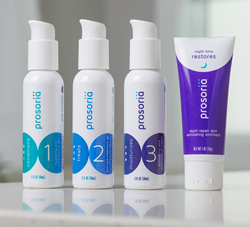 Nuvothera announced today (Jan. 3) that the National Psoriasis Foundation (NPF) has awarded Prosoria its prestigious Seal of Recognition. Prosoria is a new treatment system for relieving symptoms of psoriasis, the world's largest autoimmune disease affecting more than eight million people in the U.S. and 125 million worldwide.

“Prosoria is the first once daily, three-step psoriasis treatment system proven to effectively relieve the symptoms of psoriasis and help prevent recurrences,” said Art Clapp, CEO of Nuvothera, the product manufacturer. “We are thrilled that Prosoria is already helping many people control this chronic condition. We are very proud Prosoria has been recognized by the National Psoriasis Foundation.”

The NPF states on its website that the Seal of Recognition “highlights over-the-counter products that are proven to safely and effectively manage the symptoms of psoriasis. Independently reviewed by a panel of dermatology medical experts and people with psoriasis, the Seal of Recognition identifies tested and trusted products that help people with psoriasis ease their symptoms of dry, itchy, flaky skin.”

“In addition to the medical challenges, psoriasis can also have a significant psychosocial impact on the lives of people living with the condition,” said Clapp. “We have heard personal stories from people who were afraid to wear shorts or expose their skin or were rejected for jobs and relationships. Their self-esteem and confidence are often affected. That’s why we were so motivated to come up with what we consider the best over-the-counter treatment for psoriasis available today.”

Prosoria is a combination of clinical strength and natural pro-botanical ingredients that help relieve psoriasis symptoms while softening and restoring the appearance of skin, Clapp explained. “The products were formulated to feel light and silky. They are steroid free, fragrance feel, and paraben free, and they are safe and gentle to use every day.”

Over-the-counter self-treatment is also a growing trend as insurance copayments and high deductibles are ever increasing, he noted. As an over-the-counter product, Prosoria will be available mid-January without a prescription on amazon.com and the company’s website http://prosoria.com.

Founded in 2014 and based in Ft. Worth, TX, Nuvothera was formed with the mission to develop novel OTC products for difficult-to-treat skin diseases such as psoriasis and incorporating natural botanical ingredients using the latest in scientific knowledge and evidence-based research. The company’s primary focus is psoriasis. The management team consists of seasoned dermatology pharmaceutical executives who focus on the needs of the individual having psoriasis and partnering with the psoriasis community. “Our passion for how our products can impact people’s lives is what drives us,” said Bev Hope, Director of Marketing. “Nothing makes us happier than hearing from our Prosoria users and seeing their amazing results.” Incorporating the scientific standards of the pharmaceutical industry, Prosoria products are dermatology and clinically tested. To learn more about the new Prosoria Daily Psoriasis Treatment System, visit http://prosoria.com.