Technology and innovation that will change the way people fly are again welcomed to the 2017 Founders’ Innovation Prize competition sponsored by the Experimental Aircraft Association (EAA). The second annual competition again welcomes ideas to counter loss-of-control accidents in amateur-built aircraft. 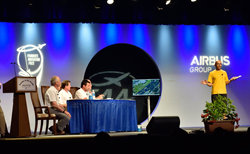 This will encourage individuals, groups and educational institutions to all get involved in our ultimate mission – improving flight safety by reducing loss-of-control accidents.

The doers, dreamers, and innovators who are ready to change the way people fly are again invited to submit their best ideas for the 2017 Founders’ Innovation Prize competition sponsored by the Experimental Aircraft Association (EAA).

The second annual competition again welcomes technology and innovation ideas to counter loss-of-control accidents in amateur-built aircraft. Entries are now being accepted through June 15, 2017. The top five entries will be invited to showcase the innovation at a “Shark Tank”-style public presentation at EAA AirVenture Oshkosh at Oshkosh, Wisconsin, next July. The top innovation will be awarded $25,000, with additional cash prizes for second and third place.

The inaugural competition in 2016 drew more than 140 entries from well-known aviation designers to those who had never submitted ideas for a design contest previously. Ihab Awad of San Jose, California, earned the 2016 top prize with his entry named “Airball,” which continually synthesized flight data so a pilot could quickly understand the current flight state of an airplane.

“Just as EAA has drawn from the ideas and abilities of its members through its first 65 years, the Founders’ Innovation Prize allows a pathway for these creative ideas in flight safety,” said Sean Elliott, EAA’s vice president of advocacy and safety. “This no doubt will build on the originality, practicality, and imagination shown in the competition’s first year in 2016. This will encourage individuals, groups and educational institutions to all get involved in the ultimate mission – improving flight safety by reducing loss-of-control accidents.”

The Federal Aviation Administration and National Transportation Safety Board have identified loss-of-control scenarios as one of the leading causes of general aviation accidents. As part of EAA’s widely praised efforts to improve safety, the Founders’ Innovation Prize was created to encourage ideas from every source that could help reduce such accidents.

Complete entry information and rules are available at eaa.org/prize. That website also includes the finalists and champion from the 2016 Founders’ Innovation Prize competition.

About EAA
EAA embodies the spirit of aviation through the world’s most engaged community of aviation enthusiasts. EAA’s 200,000 members and 1,000 local chapters enjoy the fun and camaraderie of sharing their passion for flying, building and restoring recreational aircraft. For more information on EAA and its programs, call 800-JOIN-EAA (800-564-6322) or go to http://www.eaa.org. For continual news updates, connect with http://www.twitter.com/EAA.