Museum of the American Revolution to Hold Premiere for Film on Oneida Nation’s Role in U.S. History, Narrated by Kevin Costner

In partnership with the Oneida Indian Nation, the Museum will hold a premiere of the film on Monday, Oct. 9 – Columbus Day, or the newly recognized Indigenous Peoples’ Day. The screening will be paired with a panel discussion on how the important roles of America’s multiethnic ancestors are often oversimplified or omitted from the telling of history. 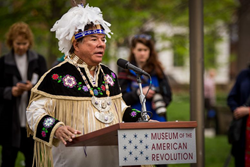 The Oneida Nation is pleased to partner with the Museum of the American Revolution to present our people’s role in the founding of America with this film premiere, especially on a day that so often omits Indigenous People altogether.

On Columbus Day, Monday, Oct. 9, which has recently gained momentum as Indigenous Peoples’ Day, the newly opened Museum of the American Revolution in Philadelphia will hold a premiere for its film about the Oneida Indian Nation’s unique role in America’s history “People of the Standing Stone.” Narrated by Academy Award-winner Kevin Costner and directed by award-winning documentarian Ric Burns, the film’s premiere will be paired with a panel discussion on how the roles of many of our country’s multiethnic ancestors have often been misrepresented in—or altogether excluded from—the telling of our nation’s history.

“In an increasingly diverse country, it is more critical than ever for people today and future generations to learn about and appreciate America’s multicultural roots and history,” said Oneida Indian Nation Representative and Nation Enterprises CEO Ray Halbritter. “The Oneida Nation is pleased to partner with the Museum of the American Revolution to present our people’s role in the founding of America with this film premiere, especially on a day that so often omits Indigenous People altogether.”

At 6 p.m. on Oct. 9, the Museum will present a special showing of the 25-minute film. The documentary traces the history of the Oneida Nation and how it stood in solidarity with General George Washington to help America forge its independence during the Revolutionary War. The film also explores how, despite that history, the Oneida people’s land was slowly appropriated by the federal government and European settlers.

The screening will be followed by a panel discussion entitled “Our Shared History: Lifting Up Lesser Known Stories of our Nation’s Founding.” Panelists include Kevin Gover, Director of the National Museum of the American Indian; Ray Halbritter, Oneida Nation Representative, Nation Enterprises CEO, and a Museum Board Member; Rosalyn J. McPherson, president of The ROZ Group, which managed community relations and oversaw historical content for The President’s House Project in Philadelphia, among many others; and Dr. R. Scott Stephenson, the Museum’s Vice President of Collections, Exhibitions and Programming. It will be moderated by Sara Lomax-Reese, President and CEO of WURD 900-AM.

Tickets to the screening and discussion are $15 for general admission, or $5 for Museum members and students (must show ID on site), and can be purchased here. The Museum’s exhibits will remain open until the screening at 6 p.m. A printed gallery guide highlighting Native American artifacts and exhibits throughout the Museum will also be available.

On Monday at 11 a.m. and 2 p.m., ahead of the film’s screening, dancers from the Oneida Indian Nation will perform traditional Haudenosaunee social dances, incorporating drumbeats and chants, in authentic dress in the Museum’s Patriots Gallery. Darren Bonaparte, a member of the Mohawk community of Ahkwesáhsne will also perform in the Patriots Gallery on Saturday, Oct. 7, Sunday, Oct. 8, and Monday, Oct. 9.

The Museum showcases personal stories of the diverse range of individuals who were part of establishing our nation, including women, free and enslaved people of African descent, and Native peoples, including the Oneida Nation. The entire second-floor atrium at the Museum is named for the Oneida Indian Nation, and a prominent multimedia gallery, complete with recreated settings and recreated recordings of Nation discussions, pays homage to the rich historical account of the Oneida Nation’s heritage.

“The Museum of the American Revolution gives voice to the lesser-known people of our nation’s founding and explores the stories that have often gone untold,” said Museum President and CEO Michael Quinn. “History is rarely simple and it is a disservice to all of us to gloss over the pieces that don’t fit in with a desired narrative. We invite visitors to wrestle with those complexities in our nation’s history, many of which are still present today.”

About the Museum of the American Revolution

The Museum of the American Revolution explores the dynamic story of the American Revolution using its rich collection of Revolutionary-era weapons, personal items, letters, diaries, and works of art. Immersive galleries, theater experiences, and recreated historical environments bring to life the events, people, and ideals of our nation’s founding and engage people in the history and continuing relevance of the American Revolution. Located just steps away from Independence Hall, Carpenters’ Hall, and Franklin Court, the Museum serves as a portal to the region’s many Revolutionary sites, sparking interest, providing context, and encouraging exploration. The Museum is a private, non-profit, and non-partisan organization. For more information, visit http://www.amrevmuseum.org or call 877.740.1776.

About the Oneida Indian Nation

The Oneida Indian Nation is a federally recognized Indian nation in Central New York. A founding member of the Haudenosaunee Confederacy (also known as the Six Nations or Iroquois Confederacy), the Oneida Indian Nation sided with the Americans in the Revolutionary War and was thanked by Congress and President George Washington for its loyalty and assistance. Today, the Oneida Nation consists of about 1,000 enrolled Members, most of them living in Central New York. The Nation’s enterprises, which employ more than 4,500 people, include Turning Stone Resort Casino, Yellow Brick Road Casino, the SāvOn chain of gas stations and convenience stores, RV Park, three marinas, Indian Country Today Media Network – the premier national multi-media source for American Indian news and information, and Four Directions Productions - a 3D animation HD cinematography studio. Proceeds from these enterprises are used to rebuild the Nation’s economic base and provide essential services, including housing, health care, and education incentives and programs, to its Members.