Premier science center to celebrate total solar eclipse with science, technology, music, and the opening of new virtual reality experience on August 19, 20, and 21 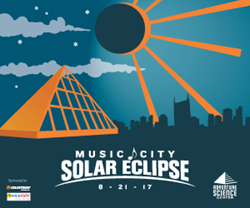 Adventure Science Center will celebrate science and the eclipse Nashville-style.

In honor of this summer’s greatly anticipated total solar eclipse and Nashville’s unique role as the largest city within the eclipse’s path of totality, Adventure Science Center will celebrate science Nashville-style, with the Music City Solar Eclipse Festival & Viewing Party on August 19, 20, 21. The celebration will feature a giant science, technology, and music festival; an eclipse viewing extravaganza; and the opening of the science center's new virtual reality installation, allowing indoor eclipse festival ticket-holders to be the first to try the new VR experience.

“Not only is this the first total solar eclipse to sweep across the country in over a century, it’s the first one Nashville’s seen in more than 500 years,” said Steve Hinkley, the new President and CEO of Adventure Science Center. Steve will officially begin leading the science center during the first week of July. “I am thrilled to be joining Adventure Science Center at such an exciting time. I'm also proud of the organization's efforts to inform and engage Nashville's community around the eclipse."

Adventure Science Center's eclipse activities will culminate in their Music City Solar Eclipse Festival and Viewing Party on August 19, 20, and 21. The city is closing down the streets around the science center to allow ASC to fill them with over 100 different hands-on, science, technology, music, and art booths from Nashville and across the country. The outdoor portion of the festival will be organized into a universe of themed areas including Sci-Fi Science (real science inspired by science fiction plus all things sci-fi), Tech of Tomorrow (futuristic gadgets, gizmos, and giant machines), BioWorld (biotechnology, nanotech, and crazy ferrofluids), Music City Science (science of sound, instrument-making, music-making, and music recording), and Journey to Space (real astronauts, rockets, the Mars Mission, and all things outer space).

“The VR Installation exemplifies the type of new and dynamic experiences the science center is bringing to Nashville. We’re thrilled to be able to unveil it at our eclipse celebration,” said Tiffany Farmer, PhD., Director of Education and Community Development at ASC. Over the past 8 months, Adventure Science Center has undergone a vast revitalization effort, including equipment upgrades, a new Innovation Incubator Lab, a new outdoor Galactic Garden and amphitheatre, and over $150,000 in new permanent exhibits.

For the Eclipse Viewing Party on August 21, the outdoor festival will transform into a large viewing area with a giant screen broadcasting NASA’s live footage of the eclipse from space; live music performances on the main stage; special speakers; live science demonstrations; solar telescope viewing stations provided by Celestron®; science-themed games, contests, and prizes; food trucks; and other fun activities. Music City Eclipse Media Sponsor, WSMV Channel 4, will broadcast the event live from the science center throughout the day.

Tickets for the indoor festival are now on sale at http://www.adventuresci.org/eclipse.

Please note: General Admission tickets to Adventure Science Center will not be available August 19, 20 & 21. People wishing to visit the Center or the Sudekum Planetarium will need to purchase indoor festival tickets.

For more information about the event, visit http://www.adventuresci.org/eclipse or call Alexis McCoy, Director of Marketing and Communications, at (615) 669-5094.