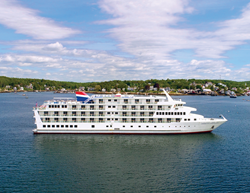 “We are very excited to support this engaging show. American Cruise Lines serves passengers who love America and are interested to travel the rivers and waterways that have shaped its history, politics and culture,” said Timothy Beebe, Vice President of American Cruise Lines.

American Cruise Lines is pleased to announce that it will be a national sponsor of PBS’ iconic series Washington Week, beginning this Friday, January 5th.

Now entering its fifty-first year, Washington Week is the Peabody Award-winning weekly news analysis series on PBS. Each Friday night, moderator Robert Costa, a full-time national political reporter for The Washington Post, leads a group of journalists in a robust roundtable discussion of the week’s major national news stories. Washington Week is the longest-running primetime news and public affairs program on television. Since 1967, it has delivered the most interesting conversation of the week.

“We are very excited to support this engaging show. American Cruise Lines serves passengers who love America and are interested to travel the rivers and waterways that have shaped its history, politics and culture,” said Timothy Beebe, Vice President of American Cruise Lines. “Washington Week explores the most important news, politics, and current events shaping the country today. There is a certain synergy between our cruise itineraries — which explore and highlight America’s past — and this wonderful show, which enlightens viewers of present-day American history in the making.”

“I am pleased that American Cruise Lines has joined us as a national underwriter of Washington Week,” said Jeff Bieber, Executive Producer of Washington Week and Vice President, Content Development & Production of WETA, which produces the program. “The support of our sponsors is vital to ensuring we can bring these critical discussions with informed journalists to the public, which relies on Washington Week to illuminate how the news of the moment affects their lives.”

In April 2018, American Cruise Lines is looking forward to launching its newest ship, American Constitution. The inaugural sailing will be on one of the Line’s newest itineraries, an 11-day American Revolution Cruise along Chesapeake Bay. Highlights will include visits to historic Williamsburg, Yorktown and Jamestown; exploring Washington, D.C., our nation’s capital; Mount Vernon, George Washington’s 18th century home; and Annapolis, home to many of our Founding Fathers who signed the Declaration of Independence.

Previously a proud sponsor of PBS’ Antiques Roadshow, American Cruise Lines is looking forward to its continued partnership with PBS and the exciting new opportunity to be a part of Washington Week.

About American Cruise Lines:
American Cruise Lines is the largest cruise line in the U.S. and the premiere leader in the industry. The Line has become the gold standard for cruising in the U.S. through a focus on ship innovation and a tradition of introducing only brand new ships. With two new ships debuting in 2018, the Line will operate 10 ships; the largest modern fleet of small cruise ships, modern riverboats, and authentic paddlewheelers in the country. Featuring over 35 itineraries, the Line cruises along the rivers, as well as the coastal and inland waterways of the U.S. including New England, Alaska, the Pacific Northwest, the Mississippi River system, and the Southeast.