The latest scoop on today's most interesting and important real estate news and celebrity homes is featured at TopTenRealEstateDeals.com. 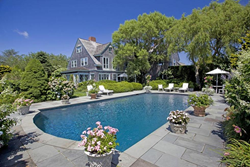 A Hamptons home that once belonged to relatives of Jackie Kennedy Onassis who left the home overrun with fleas and raccoons recently sold.

The world's #1 source for celebrity homes and real estate news.

“America's Safest House”
An Atlanta home for sale at $14.7 million is being advertised as one of the safest homes in the United States. The 36,000-square-foot, nine-bedroom home was built with its own water-supply system, a 5,000-square-foot command center hidden behind a waterfall and doors that can withstand heavy machine-gun fire. A car gallery, art museum, vault, gun range, 15 baths and a bowling alley are also part of the package.

“Grey Gardens Gets New Owner”
One of the Hamptons famous homes once belonged to relatives of Jackie Kennedy Onassis who left the home fall into disrepair overrun with fleas, cats and raccoons. Exposed by the “National Enquirer,” Jackie came to their aid paying for repairs and removal of hundreds of bags of trash. The home with nine bedrooms, six baths, guest house, heated pool and a tennis court ended up in the hands of journalist Sally Quinn and her husband, Washington Post Editor Ben Bradlee, who spent millions to restore the home. It recently sold for $15.5 million.

“Frank Lloyd Wright's Last House”
Frank Lloyd Wright designed over 1,000 buildings in a career that spanned over 70 years. His final design, the Norman Lykes House in Phoenix, is for sale priced at $3.6 million. In addition to the structure, Wright also designed the furniture and built-ins for the home. Wright's later works revolved around circles and curves such as the Guggenheim Museum in New York City.

“World's Most Expensive House”
Château Louis XIV in Louveciennes, France was the most expensive home in the world for sale in 2015 at $300 million. According to the “New York Times,” the buyer was Saudi Arabia Crown Prince Mohammed bin Salman.

“T. Boone's $250 Million Ranch”
T. Boone Pickens spent years making his Texas ranch one of the world's most valuable properties. The oilman and corporate raider began working on his Mesa Vista Ranch in 1971 adding a 6,000-square-foot family home, 12,000-square-foot lake house, 33,000-square-foot lodge, a chapel, pub, airplane runway and hangar and even the Oklahoma white-frame home where he grew up. It is all now for sale at $250 million.

“LeBron's New LA Mansion”
LeBron James has purchased a $23 million gated home in the upscale Brentwood neighborhood of Los Angeles. Features include a cigar room, spa, sauna, steam room, indoor/outdoor gym and a car gallery. LeBron's main mansion is in Ohio where he grew up and plays basketball for the Cleveland Cavaliers. He owns a third home also in the Los Angeles Brentwood area.

“It's a Deal – Bitcoins for Condos”
A Florida condo recently sold for 17.741 Bitcoin – worth about $275,000. The purchase was made by Ivan Pacheco who co-founded the cryptocurrency website Bits to Freedom. It is believed to be the first direct Bitcoin real estate transaction that did not involve a Bitcoin-to-cash transfer.

“Chicago Chewing Gum Mansion Sold”
The longtime Chicago home of William Wrigley, founder of the Wrigley chewing gum fortune, has sold after several years on the market. The nine-bedroom Italianate home in Lincoln Park near Lake Michigan was vacant for many years and recently went into foreclosure priced at $4.9 million. The Wrigley family owned the home from 1911 until 1977.

“Vanna White's Former Vineyard Mansion”
The Beverly Hills home that Vanna White and her former husband, George Santo Pietro, lived from the early 1990s until 2002 is for sale at $47.5 million. The Italianate-style estate is over 14,500 square feet with a producing vineyard and wine cellar. Mr Pietro still owns the home and has been renting it out in recent years.