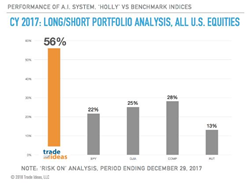 Advisors and professionals have an entirely new way of not just talking to their clients about leveraging technology, but in generating alpha for their portfolio

The net return of the Trade Ideas’ simulated portfolio for calendar year 2017 was 56% after commissions in Risk-On mode. These results were achieved by the company’s A.I.-powered investment discovery engine named ‘Holly.’ The portfolio’s gross return, before commissions and fees, measured 85%. These results compare to the S&P 500, measured by the $SPY index, which earned a 21.7% return over the same period. Risk-on performance reflects a bias towards staying in the positions beyond reward targets while strictly adhering to risk targets for each trade. Unlike risk-off mode, where reward actions do not deviate from trade plan parameters and risk management rules permit exits earlier if existing profits erode significantly, risk-on mode carries all trades the entire day until the close. This mode is often present during days of momentum which typify the majority of trading days in 2017. Note that Holly’s risk-off performance for CY 2017 was 41%.

“We closed out a second year of results that far exceed our expectations and confirms the enormous value our machine learning A.I. innovation brings to the investment decisions of our clients,” said David Aferiat, Co-Founder and Managing Partner of Trade Ideas. “On a quarterly and semi-annual basis, the A.I. outperforms market benchmarks since its inception January 4, 2016. This track record of performance bodes well as we position Trade Ideas into the model marketplace, where subscribers access the daily A.I. generated algorithms for actionable intelligence, but retain control and discretion to implement the trades according to their own decision process and leverage their own trading and rebalancing software. We’re unique in providing such results via an A.I. powered SaaS model.”

The maximum amount of alpha possible for Holly is the summation of all the correct decisions on whether to apply risk-off or risk-on modes to each trade idea. Under this ‘maximum alpha possible’ scenario, taking the best of risk-on and risk-off modes, yields a whopping 132% net commissions and fees.

Performance of the Trade Ideas simulated long/short equity portfolio reflects historical daily paper trades in the U.S. and Canadian equity markets. It is not a backtest. Trades are initiated from the daily list of algorithms published by the A.I. system, named ‘HOLLY’, and the result of its overnight optimization analysis or ‘Quantitative Combine.’ The portfolio started with a $1M beginning balance on January 2, 2017 and used $80k (rounded) worth of shares per trade. Commissions are calculated at $0.0075 per share and reflected in the net performance (shown in chart). Slippage is not factored. Short trades assume that customer's broker has access to short inventory for the trades identified by Trade Ideas. In order to showcase the effectiveness of the trades identified by HOLLY for the simulated portfolio, no positions are held overnight. This avoids any conclusion that the outsized return of the A.I. system is the result of one or a handful of successful positions held for weeks or months.

Detailed trade data is available from Trade Ideas and can be segmented by gross and net performance, market cap, and by time periods. The Trade Ideas simulated portfolio is transparent, consistent in data processing, and free from selection or survivorship bias. Its inception date is January 4, 2016.

“Quarter after quarter benchmark beating performance for over 2 years is not the only measure of success we’re tracking at Trade Ideas. Our revenues are at all time highs and reflect what our growing subscriber base already knows: Trade Ideas separates the signal from the noise and shakes up the fintech community. See it for yourself,” observed Dan Mirkin, CEO and co-founder of Trade Ideas. “You’ll either be using this innovation to capture alpha or others will be using it against you to get theirs. Advisors and professionals have an entirely new way of not just talking to their clients about leveraging technology, but in generating alpha for their portfolio.”

Sign up to receive Trade Ideas’ Trade of the Week every Monday with the trade details, charts, and the reason it’s chosen.

Next step: Schedule a demo or find out more about Trade Ideas LLC by calling (760) 230-0713 or visiting http://pro.trade-ideas.com/.
Twitter: http://twitter.com/TradeIdeas

The net return of the Trade Ideas’ simulated portfolio for calendar year 2017 was 56% after commissions in Risk-On mode. These results were achieved by the company’s A.I.-powered investment discovery