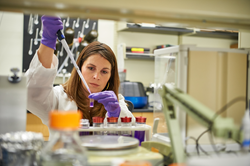 With programs like TIP and facilities like the Innovation Partnership Building at the UConn Tech Park, we are creating an innovation ecosystem

The University of Connecticut, today announced another year of record growth for companies located in the university’s Technology Incubation Program (TIP).

In 2017, TIP startups attracted a record $60 million in equity, debt, grant, and revenue funding to accelerate the growth of their operations. This is over $15 million more than the previous record set in 2016. The majority of this investment came from out of state funds and sources.

A program within UConn’s Office of the Vice President for Research, TIP supports UConn startups as well as innovative external technology ventures. All TIP startups are able to conduct R&D activities at UConn and benefit from having access to the university’s research infrastructure, specialized equipment, customized business support services, and pool of talented graduates.

“At UConn, we are doing entrepreneurship, not just teaching it,” said Radenka Maric, Ph.D., vice president for research at UConn. “We are proud of the program’s rapid growth and are committed to supporting all TIP companies, including those that are developing technologies discovered at other top universities and in industry, as well as those started by our own UConn faculty and students.”

“With programs like TIP and facilities like the Innovation Partnership Building at the UConn Tech Park, we are creating an innovation ecosystem so that these promising technologies can advance from early stage development to fast prototyping, manufacturing, and clinical trial to benefit the citizens and economy of our state,” Maric said.

Frequency Therapeutics successfully raised $30 million in 2017 to continue developing a drug-based therapy to restore hearing in individuals with hearing loss. Frequency is applying its proprietary platform, called Progenitor Cell Activation (PCA™), to regenerate inner ear sensory hair cells, which detect sound and transmit signals to the brain. Per the World Health Organization (WHO), 360 million people worldwide have moderate or worse hearing loss, with an additional 1.1 billion people at risk for hearing loss from recreational noise alone. The company recently announced that their first-in-Human safety study of their lead PCA™ treatment for hearing loss, FX-322, achieved all endpoints.

“Frequency’s scientific team at UConn TIP has been critical in supporting the development of the company’s PCA platform to restore hearing, and is now applying these insights to expand into additional therapeutic indications,” said Bob Langer, Sc.D., the Institute Professor at the Massachusetts Institute of Technology and co-founder of Frequency Therapeutics. “We greatly appreciate the ongoing support from TIP as Frequency advances its hearing loss program in the clinic.”

Led by inventor and co-founder, Dr. Bruce Liang and CEO Glen Mattes, Cornovus Pharmaceuticals also had an impressive year. The company, which is developing a new medication for people with advanced heart failure, raised $4.3 million in equity and grants. Liang, who is also dean of the UConn School of Medicine, formed the startup in 2011 with assistance from UConn’s technology commercialization and venture development groups.

Liang is hopeful about Cornovus' chances given early results from animal testing. With this additional investor money, the Cornovus team plans to fund more preclinical testing to apply for investigational new drug (IND) status from the U.S. Food and Drug Administration, a prerequisite to human testing.

Bioarray, a molecular diagnostics biotech housed at TIP in Farmington since 2016, raised over $5 million in equity and debt in 2017. The women-led company is developing a predictive cancer treatment platform technology consisting of unique genes and proprietary algorithms that provides patient-specific information to determine the optimal course of treatment for cancer. Bioarray was recently issued a U.S. patent for their lead test, BA100, which will be available to physicians and breast cancer patients in late 2018.

“Being a part of the UConn Technology Incubation Program has been incredibly beneficial for us,” explained Gary Mathias, Thetis CEO. “We’ve been able to leverage the expertise and infrastructure that a top research university provides to conduct preclinical efficacy studies and advance our promising new IBD therapy towards clinical use.”

In 2017, TIP was home to 35 companies – the most in the program’s history. This is thanks in part to Connecticut’s $20 million investment in a new expanded incubator facility at UConn Health and a renewed commitment on the part of the university to support venture development. Mostafa Analoui, Ph.D., a life sciences entrepreneur and investment banker, joined UConn in October 2016 to lead these efforts, including heading TIP.

The TIP expansion, paid for through the state of Connecticut’s landmark Bioscience CT initiative, increased total square footage for TIP by 20,000 square feet and was completed in January 2016. The program now boasts approximately 30,000 square feet of high-tech wet labs and office space at its two major locations in Farmington and Storrs.

Increased efforts to provide TIP companies access to likely investors has been a top priority, said Analoui. Canaan Partners, Elm Street Ventures, Agent Capital, and pharmaceutical giant Johnson & Johnson all visited the facility in the last year to meet TIP startups, learn about their technologies, and discuss their investment strategies.

“The record growth that we saw again this year speaks to the quality of the companies in the program, which are all high-potential startups that want to grow in Connecticut,” said Analoui. “As an integral part of the state’s innovation ecosystem, TIP supports the growth of these companies through a community of fellow entrepreneurs, venture development experts, connections with investors, and support to seek funding. We’re thrilled with the growth of our member companies and of the Technology Incubation Program itself.”

Established in 2004 to accelerate the growth of technology-based startups with a strong connection to the University of Connecticut, TIP has supported approximately 100 startup companies. These companies have raised more than $164.6 million in debt and equity, $62.3 million in grant funding, and more than $50.7 million in revenue while in the program. At the end of 2017, TIP companies employed 91 full-time and 70 part-time employees.

For more information about the UConn Technology Incubation Program, call 860-679-2921 or visit http://www.tip.uconn.edu.