Unprecedented 26,000 Board Feet Available for the First Time Ever 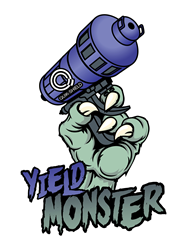 We’ve pushed our technology advantage even further to produce staggering yields and unprecedented efficiency, while our competition is still selling old technology.

SWD Urethane, a spray polyurethane foam (SPF) manufacturer in the southwestern United States, has announced the next generation of Ultra-Low Density foam: Quik-Shield 108YM, which is affectionately nicknamed the “Yield Monster”.

Quik-Shield 108YM has an even lower density than the previous generation of Ultra-Low Density foam. This foam now has densities reaching as low as 0.36 lbs. per cubic foot while still maintaining a high R-value of 3.6 per inch. This provides a 10% boost to Quik-Shield 108’s already impressive yield, for up to a 39% greater yield over antiquated 0.5 lb. foams. This has enabled spray foam contractors to attain unprecedented yields of 26,000 board feet per set of material.

Greater yield significantly reduces material cost for projects, allowing contractors to be more competitive in bids. Quik-Shield 108YM now even further bridges the price gap between traditional insulation, such as fiberglass or cellulose. This enables homebuilders and other building professionals to adopt superior spray foam as a cost-competitive alternative to traditional insulation.

“Two years ago, we launched the industry’s first Ultra-Low Density foam. Last year, we added the one-hour reentry for new construction with no fans required,” explained Jim Perkins, President of SWD Urethane. “And now here we are, raising the bar again, putting the rest of the field even further behind with the Yield Monster. We’ve pushed our technology advantage even further to produce staggering yields and unprecedented efficiency, while our competition is still selling old technology. It is no surprise that spray foam contractors who are using our Quik-Shield products are increasing their margins by up to 60%.”

SWD Urethane is a leading supplier of spray polyurethane foam, manufacturing over 100 types of polyurethane foams and polyurea coatings. From 2014 – 2016, SWD Urethane has helped its contractors win 26 out of 60 SPFA Industry Excellence Awards. SWD Urethane has been in business since 1972, and they are one of the fastest-growing spray foam suppliers in the industry. SWD President, Jim Perkins, is the former chair and current board member of the Spray Foam Coalition, a key trade organization for spray foam suppliers. For more information, contact Alan Annis, Marketing Director, at 800-828-1394 or marketing(at)swdurethane(dot)com.