Sound Royalties, a groundbreaking company seeking to fill the financing void in the music industry, today announced its work with popular R&B singer Jay King. This month, King is releasing a hot new album, “Helen’s Son,” in the U.S., including the single “Good Kind of Lovin,’” which has already soared to the top of the U.K. charts. 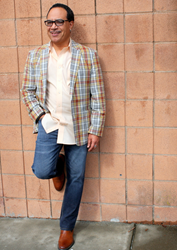 Sound Royalties is a true partner that’s really looking out for your best interests in the long run. It’s often hard to have enough money to produce your next record, to market and promote, but Sound Royalties put extra dollars in my pocket immediately.

Sound Royalties, LLC, a game-changing company that enables musicians to fund their creative pursuits without sacrificing their copyrights, today announced its work with R&B artist and music industry trailblazer Jay King. This announcement comes just days ahead of the U.S. release of King’s new, highly-anticipated album “Helen’s Son,” featuring the single “Good Kind of Lovin’” which is already a #1 hit in the U.K. King’s new project will be heavily promoted in the United States by Virtuoso Music And Distribution, with whom King recently secured a new record deal.

King, who has been performing for more than 30 years, founded the popular group Club Nouveau. The group performed a Grammy-winning cover of “Lean on Me,” which spent two weeks at number one on the Billboard Hot 100 charts in 1987. But Club Nouveau is perhaps best known for the multi-million-dollar selling, #1 song on the Billboard R&B charts, “Rumors.” King has a host of other hit songs as well, including “Situation #9,” “Why You Treat Me So Bad,” “Jealousy,” “Heavy on My Mind” and “I Got 5 on It.”

Once King learned about how Sound Royalties’ artist-friendly model works, giving music professionals access to their royalty streams upfront and working with them to ensure the funds to continue creating music, he was all in. Less than a week later, he had signed on to work with the innovative company.

“Sound Royalties is a true partner that’s really looking out for your best interests in the long run,” said King. “It’s often hard to have enough money to produce your next record, to market and promote, but Sound Royalties put extra dollars in my pocket immediately. They’ll even return royalty overflow to me, where most companies keep all that money. If you want a company that’s going to work with you, that you can take at their word, that will make sure you can survive based on your royalty stream, that’s Sound Royalties. I’m very glad a company like this exists.”

Sound Royalties CEO and Founder Alex Heiche added: “Jay King is an extremely talented individual, and we are thrilled to be working with him as he releases his incredible new album. It is the company’s and my personal passion to ensure that artists like him can both retain the rights to their music and have financial security. We are very happy that Sound Royalties was able to provide King with the needed funding to continue his legendary work.”

Founded by CEO Alex Heiche, Sound Royalties, LLC is a privately-owned specialty finance firm that helps music industry professionals fund personal and professional projects while allowing them to retain the rights to their music and royalties. The company’s core business is offering royalty advances of anywhere from $5,000 to $10 million, without having to deal with credit issues, while preserving all rights to the artist’s music. It does this by advancing artist performance royalties paid through music labels and Sound Exchange, songwriter royalties paid through music publishers and Performing Rights Organizations such as ASCAP, BMI and SESAC, and music streaming royalties from Spotify, Apple Music and YouTube. To date, Sound Royalties, LLC has worked with a wide range of leading music industry professionals, including Grammy Award winners, platinum recording artists and notable music industry executives in every genre. Learn more at http://www.soundroyalties.com.