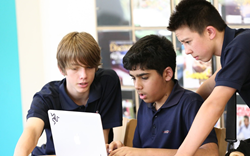 Students review their performance on the Caliber critical thinking assessment

Schools measure what they value and value what they measure. Caliber enables schools to become more systematic, intentional and deliberate about critical thinking

Callido Learning, a digital publisher for the international schools segment, launched Caliber – an online assessment tool for high schools to measure critical thinking skills. This tool allows principals, administrators, school chains and government bodies to gain visibility at all levels on the development of this core skill.

The launch follows a 2-year long pilot with over 3000 students taking the test across 40 international schools in the Asia Pacific region. The launch was accompanied by the publication of a Test Validity Report which establishes the assessment’s correlation with final grades in the IGCSE examinations. The report was authored by Dr. John W. Young, an assessment expert based in Maryland, USA and formerly the Head of Research at the International Baccalaureate Organization.

Critical thinking is widely recognized by schools, universities and employers as one of the fundamental cognitive abilities that determine academic and workplace success. International curricula like Cambridge Assessments International and the International Baccalaureate have adopted the development of critical thinking skills as one of their core aims. Critical thinking is also a stated objective for various national educational reform initiatives like the US Common Core standards, the UAE National Agenda for Education, Australia’s General Capabilities framework as well as Singapore’s push for 21st Century Competencies through its Ministry of Education.

Despite its desirability as a learning outcome, however, critical thinking has always been difficult to measure. Existing measures of critical thinking largely rely on students self-reporting which is fraught with challenges.

“As an organization, we have always advocated for explicit instruction in critical thinking skills” said Madhu Agrawal, Head of Operations at Callido Learning. “To target its sustained development, we needed a way to measure it. So, we initially developed Caliber as an in-house diagnostic tool to demonstrate the effectiveness of our intervention to the schools we work with.”

“The development teams took pains to ensure the assessment is a valid test of what students can do with new information as opposed to the content they happen to know” said Chinmaya Kulkarni, Head of Product Development at Callido Learning.

Starting January 2018, the Caliber assessment can be purchased independently by schools for USD 10 per student for use from Grades 6 to 12. Made of up 40 test items designed to completed online within one hour, the Caliber assessment uses a case-study approach to measure a student’s ability on the ingredients of critical thinking: an ability to define problems, gather relevant information, apply the principles of reasoning to establish valid conclusions, use research methods to identify potential solutions, evaluate their chances of success and communicate their findings. Schools receive a student-wise as well as a grade-wise report while school groups and districts receive a school-wise report with national benchmarks.

“The strong correlation with A-stars in IGCSE shows that critical thinking is a key ingredient of academic achievement in the international systems of education” said Sriram Subramanian, Head of Development at Callido Learning. “We believe that schools measure what they value and value what they measure. Caliber’s launch enables schools to become more systematic and intentional about critical thinking.”

Callido Learning is a digital publishing house based in India that creates Common Core aligned curriculum resources for critical thinking skills in the K-12 segment. Its digital curriculum for critical thinking is reviewed by Cambridge and adopted by over 50 internationals schools across 9 countries. It also owns Caliber - the only digital assessment for 21st Century Skills.