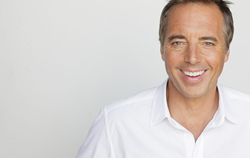 "To achieve happiness you need to ensure you have a 'balanced portfolio' in terms of your daily emotions, purpose and life satisfaction."

Dan Buettner, National Geographic fellow and Blue Zones founder, spoke at the World Economic Forum annual meeting at Davos this week. He shared his extraordinary findings on what drives happiness in individuals and countries, as well as how to use these insights to improve the well-being of large populations.

Amidst a crowd of world leaders, Nobel Prize winners, and industry titans, Buettner's presentation of his research on the longest-lived and happiest populations in the world received intense interest and was highlighted by the press as one of the best of Davos. His speech, which included global takeaways for improving lives and entire communities, was in keeping with the Davos 2018 theme of “Creating a Shared Future in a Fractured World.”

This year's World Economic Forum report states, "Decades of prioritizing economic growth over social equity has led to historically high levels of wealth and income inequality." Their Inclusive Development Index measures nations using multiple metrics including GDP, employment, life expectancy, poverty, wealth inequality, and carbon intensity. The United States has the highest GDP of any country in the world, but it also has the second highest rate of poverty among the world's 30 most advanced economics. Overall, the U.S. ranked 23rd on the list of 30 advanced economies.

The World Economic Forum meeting takes place every January in Davos, Switzerland to address global issues. It includes over 3,000 participants from around the world and is attended by heads of state, C-suite executives, and other policymakers. Headline guests this year included President Donald Trump, Indian Prime Minister Narendra Modi, and French President Emmanuel Macron.

About Dan Buettner and Blue Zones®