United Overseas Bank, the Third Largest in Southeast Asia Gets With HashCash for Instant Remittances

UOB would be able to connect to Banks in India, Pakistan, Philippines, Sri Lanka and Australia to carry out real-time remittances and corporate payments on HC NET. 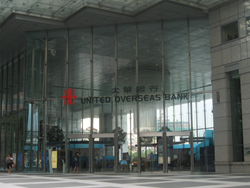 United Overseas Bank, the Third Largest in Southeast Asia gets with HashCash for instant remittances

Blockchain is leading to systemic changes within the banking industry. It enables banks with a far more efficient and cost-effective settlement network - said Raj Chowdhury, Managing Director, HashCash and a well-regarded blockchain expert

With a friendly government, large capital flows and a robust infrastructure, Singapore is often touted as the epicenter of the Blockchain revolution. It comes as no surprise when UOB, one of the largest banks in the region takes a step towards that direction with its recent collaboration with HashCash Consultants.

The Singaporean bank has over 60 branches locally and is spread across 19 countries in southeast Asia, Europe and North America. UOB is into corporate and personal banking services, insurance, venture capital and asset management.

Until last year, R3 and Ripple had been popular names in blockchain news as far as collaboration with large banks went.

This year observers are witnessing the rise of HashCash, the Silicon Valley company that has attracted the likes of UAE exchange, Russia’s Alfa-Bank, Commonwealth Bank of Australia, and Germany’s Commerzbank among others.

Banks, Corporations and Currency exchanges are onboarding to the network, HC NET for retail remittances, vendor payments, wage disbursements, trade finance and several other business cases. The network uses HCX as its native currency but can also use fiat currency for settlement.

Banks believe that Incorporating blockchain in banking processes would boost speed and cut the cost of money transfer by eliminating SWIFT cost among several other advantages.

“Blockchain is leading to systemic changes within the banking industry. It enables banks with a far more efficient and cost-effective settlement network”, said Raj Chowdhury, Managing Director at HashCash and a well-regarded Blockchain expert.

Founded by Datuk Wee Kheng Chiang, UOB was incorporated on 6 August 1935 as the United Chinese Bank; the change of name came into effect in 1965. The Bank catered mainly to the Fujian community in its early years but over the past decades, UOB has grown in strength and stature. Through a series of acquisitions, it is now a leading bank in Asia. Besides Far Eastern Bank in Singapore, UOB’s major banking subsidiaries in the region are United Overseas Bank (Malaysia), United Overseas Bank (Thailand), PT Bank UOB Indonesia and United Overseas Bank (China). Today, the UOB Group has a network of more than 500 offices in 19 countries and territories in Asia Pacific, Western Europe and North America.