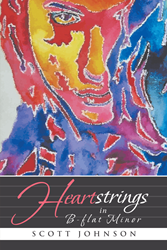 An author and former journalist has released his debut psychological thriller, which examines the complex dynamic between abusers and their victims and the epidemic of suicide through the eyes of a wealthy and ambitious young woman who finds herself caught in a sinister financial scam at the hands of the man she loves.

Set primarily in Chicago and its North Shore region, “Heartstrings in B-flat Minor,” by Scott Johnson, unravels the story of Sheryl Taylor – a world traveler and successful international tour guide who, against her better judgement, repeatedly finds herself ensnared by the charms of her on-again, off-again boyfriend, Dr. Sterling Jackson. A master of deception, Jackson readily capitalizes on Taylor’s trust and affection, and as his hold on Taylor tightens, she teeters on the edge of bankruptcy and mental collapse and entertains thoughts of suicide.

“As a former journalist, I’ve been exposed to many dark and unusual corners of life,” Johnson said. “I wrote about these corners, delivered the stories on-air and came to find such corners within my personal world, as well. This book is meant to deliver an entertaining, albeit dark, story while also delving deeply into the contemplation of suicide and the societal and psychological challenges faced by victims of crime or abuse.”

“‘Heartstrings in B-flat Minor’ is a grimy gem,” Foreword Clarion reviewer John M. Murray wrote about the book. “… Slow and methodical pacing, punctuated by flashbacks into both leads’ intertwined histories, bring its eeriness forth. Though the book’s action is light, its conclusion is surprising, tense, and taut with suspense.”

Johnson’s book presents a compelling and ominous narrative that twines fictional characters with real-life commentary about the intricate layers of predatory or abusive relationships as well as the prevalence of mental health issues and suicidal ideation or completion among the victims of said relationships.

About the author
Scott Johnson is an accomplished voice-over actor and a former investigative journalist for affiliates of ABC, NBC, CBS and PBS. Johnson holds a bachelor’s degree in speech communications from Northern Illinois University. He currently resides in Chicago. To learn more, please visit http://www.scottjohnsonbooks.com.