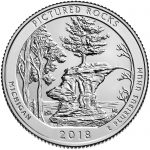 The reverse (tails) of the Pictured Rocks National Lakeshore quarter depicts Chapel Rock and the white pine tree that grows atop it. Inscriptions are “PICTURED ROCKS,” “MICHIGAN,” “2018,” and “E PLURIBUS UNUM.” A digital image of the quarter is available here.

“This new coin not only reflects one of the many unique features of the longest freshwater coastline in the United States, but also the breathtaking natural beauty of the state,” said Marc Landry, a Michigan native and Acting Associate Director of the Mint’s Numismatic and Bullion Directorate.

“America's public lands are full of postcard worthy places, like one of Michigan's best kept secrets, Pictured Rocks National Lakeshore,” said U.S. Secretary of the Interior Ryan Zinke. “With its awe-inspiring scenery and amazing year-round recreational opportunities, it is a testament that not all of our great public lands are located out West. Whether you want to hunt and fish or bike and kayak, its sandstone cliffs, towering waterfalls, hardwood forest, and miles of beaches offer something for all visitors.”

The NPS, a bureau of the Department of the Interior, has held stewardship of America's national parks since 1916, when President Woodrow Wilson signed legislation creating the agency. It oversees more than 400 sites covering approximately 84 million acres in the United States and its territories. In addition to national parks, the NPS system includes monuments, battlefields, military parks, historical parks, historic sites, lakeshores, seashores, recreation areas, scenic rivers and trails, as well as the White House.

The Mint is issuing these quarters in the order in which each honored location was first established as a national site.

The United States Mint was created by Congress in 1792 and became part of the Department of the Treasury in 1873. It is the Nation's sole manufacturer of legal tender coinage and is responsible for producing circulating coinage for the Nation to conduct its trade and commerce. The Mint also produces numismatic products, including proof, uncirculated, and commemorative coins; Congressional Gold Medals; and silver, gold and platinum bullion coins. The Mint's numismatic programs are self-sustaining and operate at no cost to taxpayers.