Greenberg Traurig, LLP has been recognized by the National Kidney Foundation (NKF) at their annual awards reception. 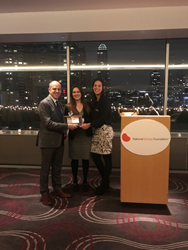 Global law firm Greenberg Traurig, LLP has been recognized by the National Kidney Foundation (NKF) at their annual awards reception, Feb. 1, at Upper Story in New York City. The firm was honored for raising more than $40,000 for the organization through their participation in Law Rocks NYC.

Law Rocks NYC is a battle of the bands that promotes music education for underprivileged youth and raises money for local nonprofits. Greenberg Traurig’s house band “The Meltones” played for the NKF serving Greater New York in support of Greenberg Traurig Shareholder Kenneth Zuckerbrot, who had been battling kidney disease and underwent kidney transplant surgery on Oct. 30, 2017.

The award presented by NKF was accepted by two members of The Meltones, Stephen L. Rabinowitz, co-managing shareholder of Greenberg Traurig’s New York office and chair of the New York Real Estate Practice, and Litigation Associate Ashley A. LeBlanc. Rabinowitz plays the guitar and LeBlanc is on vocals.

According to the organization’s website, NKF is a major voluntary nonprofit health organization dedicated to preventing kidney and urinary tract diseases, improving the health and well-being of individuals and families affected by kidney disease, and increasing the availability of all organs for transplantation. For more information, click here.

About Greenberg Traurig: Greenberg Traurig, LLP (GT) has more than 2,000 attorneys in 38 offices in the United States, Latin America, Europe, Asia and the Middle East. GT has been recognized for its philanthropic giving, was named the largest firm in the U.S. by Law360 in 2017, and is among the Top 20 on the 2017 Am Law Global 100. Web: http://www.gtlaw.com Twitter: @GT_Law.