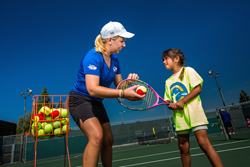 The number of TGA tennis franchises and participation saw substantial growth in 2016 and 2017. It's a testament to our program delivery model, the business infrastructure we invested in the last three years, and the curriculum we execute

The 39th annual Franchise 500® appears in the January 2018 issue of Entrepreneur Magazine with TGA Premier Tennis at No. 402 on the list. More than 1,000 companies applied, which made the selection process the most competitive to date. Using a proprietary ranking formula Entrepreneur analyzed key franchise factors such as costs and fees, size and growth, support, brand strength and financial strength and stability.

"The number of TGA tennis franchises and participation saw substantial growth in 2016 and 2017. It's a testament to our program delivery model, the business infrastructure we invested in the last three years, and the curriculum we execute," Joshua Jacobs, CEO of TGA, said. "To be recognized among elite businesses delivering youth programs in Entrepreneur's Franchise 500® is very gratifying and further solidifies that our tennis franchise model empowers local entrepreneurs to activate youth and families into the sport."

The unique approach using a franchise model caught the attention of the sport's governing body, the United States Tennis Association (USTA), because of its ability to develop consistent programming and have local entrepreneurs vested in growing the sport in their community. The USTA recognized TGA's innovative delivery system and how it brings introductory tennis programs into schools and grows participation rates nationally.

"The increase in TGA chapters and participation numbers are proving the model works," Jacobs said. "As TGA continues to expand tennis into new markets, we anticipate 250,000 kids participating within five years and over 700,000 in 10 years."

About TGA Premier Sports
TGA Premier Sports is leading the charge in a new era of youth sports. Specializing in golf, tennis and team sports, TGA and its founders combine the power of education with sports. In a day and age when youth are consumed by video games and indoor activities, keeping kids healthy of mind and body is of utmost importance to TGA and its franchise operators. Through an innovative franchise business model recognized by Entrepreneur Magazine as a "Top 10 Franchise Value," TGA empowers passionate entrepreneurs to impact the lives of youth and families by bringing youth sports enrichment programs into their communities.

TGA franchises can be found in more than 80 markets across 23 states, as well as internationally in Canada and Spain. Continued growth has impacted 750,000 youth and made these sports available to 1.75 million families. Future expansion strategies include the addition of 100 more franchises over the next two years, the addition of more sports, and impacting another one million youth through its education-based programs and the TGA Sports Foundation, which provides access for all children and promotes the physical, educational, social, and character-building elements of these sports.