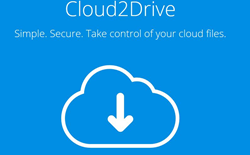 The Cloud2Drive web portal is ideal for anyone who is interested in the revolutionary end-to-end cloud security.

The new component of Cloud2Drive is a browser-based client portal that allows for access to virtual drives and files via a web interface as opposed to the traditional C2D agent software, with access controlled by a systems administrator. Originally inspired following a request to meet the requirements of a U.S. government agency, the new feature is available to any subscriber to C2D who doesn’t require the full range of functions allowed by the downloadable client software.

“The Cloud2Drive web portal is ideal for anyone who is interested in the revolutionary end-to-end cloud security provided by C2D, without requiring a full download of the C2D software,” said Extenua CTO Federico Simonetti. “This new feature is just one more way that Extenua is striving to create innovative and practical solutions for cloud security issues, while at the same time producing products that satisfy the demands of the market and our customers.”

Extenua Inc. is an award-winning developer of enterprise security software that simplifies and secures cloud storage technologies in revolutionary ways. Extenua's customers include Fortune 500 companies as well as government institutions, security agencies, and thousands of small and mid-size businesses. Additional information about Extenua and Cloud2Drive is available at http://www.extenua.com. Extenua Inc. is a privately-held corporation based in San Jose, California.