Office Sign Company is producing the awards for the largest advertising competition in North Dakota. 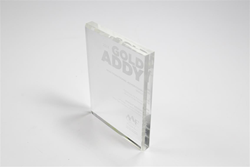 A total of 140 custom awards were produced out of Office Sign Company's production facility in Fargo, North Dakota.

Office Sign Company (OSC) is the “Sign and Awards Sponsor” for the 2018 American Advertising Awards of North Dakota (AAF-ND). Also known as the “Addy Awards,” this ceremony highlights successful creative campaigns all across North Dakota. Such creativity ranges from website design, to promotional gifts, to vinyl train wraps. According to the AAF-ND, over 40,000 samples of creative work get submitted to the American Advertising Federation (AAF) each year. This celebration is the world’s largest advertising competition.

Office Sign Company is a global, e-commerce signage company based out of Downtown Fargo, North Dakota. They are manufacturers of custom office signs, name badges, conference room signs, and brushed metal door and room signs. Beyond that, they can create custom signage of various forms for customers, including the custom awards shown at right.

On behalf of their sponsorship, Office Sign Company produced and provided custom awards for the ceremony. Each clear, beveled award was laser-etched and Gold and Specialty Awards were treated with metallic vinyl on the second surface, as well. A total of 140 custom awards were produced out of OSC’s production facility in Fargo, North Dakota. These accolades will be presented at the 2018 Addy Awards ceremony on February 23rd, 2018 in Fargo, ND to honor the recipients from each category.