Author Kara L. Amis announces publication of ‘The Secret of the Stairs.’ 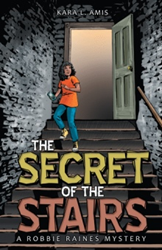 Armed with her intense curiosity, a vast knowledge of historical trivia and her helpful visions, Robbie Raines, an inquisitive 11-year-old African-American girl, sets out to solve a decade-old murder mystery in author Kara L. Amis’ debut novel, “The Secret of the Stairs: A Robbie Raines Mystery” (published by Archway Publishing).

In the book, Robbie is forced to spend her summer days with her mysterious Aunt Enna in a dilapidated, horror-movie-scary old house. While there, she discovers a dark family secret. A local handyman was found dead in the basement years ago, and his death was never solved.

Intrigued, Robbie wonders if it was truly an accident or if her aunt committed a cold-blooded murder. With the aid of a retired detective named Granger, and her best pal, Stacie, Robbie discovers clues long missed by the police and pieces together what really happened in her aunt’s shadowy stairway.

Interested in creating a new African-American female character, Amis decided to write a detective story with a role model for girls like the main character Robbie.

About the Author
Kara L. Amis is a television producer living in Brooklyn. Originally from Washington, D.C., her first ambition was to be a history professor. But because of her love of television and storytelling, she studied communications at the University of Notre Dame, and obtained a Master of Arts degree at New York University. She currently works at ABC News-Lincoln Square Productions, where she has spent many years focusing on true crime stories. She has produced numerous news, lifestyle and entertainment programs. “The Secret of the Stairs” is her debut book.

Simon & Schuster, a company with nearly ninety years of publishing experience, has teamed up with Author Solutions, LLC, the leading self-publishing company worldwide, to create Archway Publishing. With unique resources to support books of all kind, Archway Publishing offers a specialized approach to help every author reach his or her desired audience. For more information, visit http://www.archwaypublishing.com or call 888-242-5904.