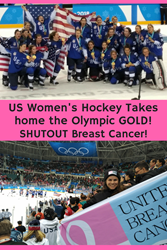 The United Breast Cancer Foundation witnessed history in the making on Thursday in South Korea when the US Women's Hockey Team faced their rival, Canada for the Gold Medal Olympic game in an epic, not-to-be-missed match. Like the 2014 Sochi Games, the two teams faced-off in overtime, but this time, Team USA reigned victorious.

UBCF’s Director of Operations, Beth Reichart attended the game in support of the US Women’s Hockey Team while sharing the organizations message, “SHUTOUT Breast Cancer”. In an interview shortly after the Gold Medal Game, Beth shared, “UBCF is absolutely thrilled to be here in Gangneung in support of Team USA. The Olympic Games offers UBCF the ultimate platform to share our SHUTOUT Breast Cancer message with the global community.” Beth continued, “We witnessed history in the making today - what an awesome and well-deserved win for US Women’s Hockey! Now, let’s SHUTOUT Breast Cancer!”

The USA/ Canada game, full of anticipation, adrenaline and heart, was exciting to watch before the puck even dropped. Hilary Knight scored the first goal of the night for the US with only 26 seconds remaining in the first period. Just two minutes into the second period, Haley Irwin scored Canada’s first goal. Five minutes later, Canada took the lead with a goal from captain Marie-Philip Poulin.

Monique Lamoureux scored the second goal for the US late into the 3rd period, tying the game 2-2 and ultimately resulting in an overtime period. The tie remained after an adrenaline filled, nail-biting 20-minute period. The game moved to a shootout that needed even more shots to finally determine the Olympic Champions. Maddie Rooney, USA’s 20-year-old goalie, blocked Canada’s final attempt at victory. With additional shots in the shootout, the winning goal was locked-in by three-time Olympic competitor, Jocelyne Lamoureux Davidson. It was literally the perfect moment and one that has undoubtedly made Olympic history. This is the first Olympic Gold Medal for US Women’s Hockey since the inaugural women's tournament in Nagano in 1998.

Background on UBCF
UBCF is committed to offering breast health and wellness services focused on cancer prevention, screening, treatment and overall wellness. UBCF’s mission is to make a positive difference in the lives of those affected by breast cancer and carries it out through seven life-supporting patient and family programs available to women, men and families nation-wide. UBCF never denies services to anyone regardless of age, race, gender, ethnicity, income or medical insurance coverage. Those in need of breast health services may visit ubcf.org or call toll-free, 877-822-4287. Tax-deductible contributions may be made towards UBCF’s programs. UBCF accepts vehicle and property donations as well. Contributions may be mailed to UBCF, P.O. Box 2421, Huntington, NY 11743, or donate through the Combined Federal Campaign, #77934