VGOD Looks Forward to Broader Horizons for the Vaping Industry

The American Cancer Society Changes Their Stance on E-Cigarettes 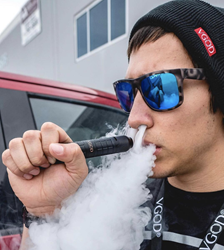 E-Cigarettes Could Be A Solution

We all agree that e-cigarettes are significantly less harmful than smoking. - Public Health England

The American Cancer Society, which is a nationwide non-governmental voluntary health organization, released a position statement on e-cigarettes this week. While standing firm on the fact that cigarettes are“ the single greatest cause of cancer and kill about 7 million people worldwide each year,” the official Board of Directors for the American Cancer Society admits, in not so many words, that the use of e-cigarettes has dramatically transformed perspectives of health and safety in regard to the use of tobacco products. In this light, the ACS has approved the position that, “Based on currently available evidence, using current generation e-cigarettes is less harmful than smoking cigarettes...”

The ACS supports the idea that individuals should quit smoking cigarettes using any method that will work for them while still emphasizing that their health is of the most importance. ACS still recommends seeking out the assistance of clinicians and using “...FDA-approved cessation aids...” Nevertheless, the ACS recommends to clinicians that they help guide their patients in the direction of converting from actively smoking cigarettes to vaping as an alternative method to quit smoking. “Some smokers, despite firm clinician advice, will not attempt to quit smoking cigarettes..” and “..should be encouraged to switch to the least harmful form of tobacco product possible; switching to the exclusive use of e-cigarettes is preferable to continuing to smoke combustible products.”

The ACS release of their position statement regarding e-cigarettes is definitely another positive contribution towards more forwarding thinking in the United States. Hopefully, this message from the ACS will have an impact on how doctors throughout the U.S. will begin to assist their patients to make a transition from cigarettes to vapor products for health benefits. As more studies continue to conclude that e-cigarettes can give smokers a substantial advantage to becoming healthier and eventually cutting the habit out completely, it will also foster public acceptance of e-cigarettes as a viable alternative method for nicotine consumption. Nevertheless, the ACS stance is still firm when it comes to quitting tobacco products completely in regard to prevention and public health. Despite still erring on the side of caution, the ACS should be applauded for their sensibility and more progressive stance on e-cigarettes. This stance from the ACS is a major development for the Vaping Industry and will change the dialogue affecting impending decisions that will be made in regard to regulations within the US.