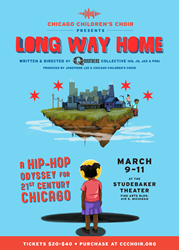 This is a love letter to Chicago and a testament to the hope and promise we see in our young leaders...

Long Way Home, a hip-hop spin on Homer’s Odyssey set in Chicago’s diverse landscape, written and directed by widely-acclaimed Q Brothers Collective and produced by Josephine Lee and Chicago Children’s Choir (CCC), premiers at Studebaker Theater in Chicago from March 9th through 11th. The piece makes its mark in the city it showcases with a limited engagement of five performances, tickets available at ccchoir.org/longwayhome.

Long Way Home captures the pulse of contemporary life in Chicago. Though primarily hip-hop, the piece pays homage to the tapestry of cultures in the city through the music genres that were born and cultivated there including blues, punk, and Chicago house music. CCC singers ages 13-18 perform in the piece, which speaks directly to the heart of the organization: to bridge diverse communities through music.

“This is a love letter to Chicago and a testament to the hope and promise we see in our young leaders,” said Josephine Lee, President and Artistic Director of CCC. “Our singers have been involved in the creative process. It has given them the chance to develop this highly-professional piece and also validates what they are going through at this time.”

Long Way Home is directed by the Q Brothers, whose critically-acclaimed work includes Othello: The Remix commissioned by Shakespeare’s Globe Theater in London and Chicago Shakespeare Theater; Q Gents, a reimagining of Two Gentlemen in Verona; A Q Brothers’ Christmas Carol, a re-work of Charles’ Dickenson’s classic story; Funk it Up About Nothin’, winner of the Dress Circle Award for Best Musical Production at the 2008 Edinburgh Fringe; and others. The Q Brothers have been writing plays and musicals for nearly 20 years, taking classic works and translating them into modern contexts.

“When you hear the Chicago Children’s Choir perform, you get goosebumps,” said JQ, Creative Director and Musical Director for Q Brothers. “The juxtaposition of innocent voices on heavy topics is awesome. It really encapsulates the epic nature of this piece.”

“These kids are a part of a piece that they can stand behind,” said Jackson Doran, Creative Associate and Director of Education for Q Brothers. “It is an insanely dope professional piece of art, which is empowering and shows the world the potential of young performers.”

Long Way Home is made possible by the Artistic Initiatives Fund of Chicago Children’s Choir, an IncentOvate Grant from the Chicago Department of Cultural Affairs and Special Events, and Allstate Insurance Company. In-kind set design is produced by award-winning Kehoe Designs. Tickets are available at ccchoir.org/longwayhome for performances:

About Chicago Children’s Choir
Founded as a single choir in Hyde Park at the height of the Civil Rights Movement in 1956, today Chicago Children’s Choir serves more than 4,800 youth who represent all 57 Chicago zip codes. Founder Reverend Christopher Moore believed in using music to unite youth from diverse backgrounds. That simple yet powerful mission has grown exponentially, with programs in 86 city schools, 10 neighborhoods, a choir for boys with changing voices, and the world-renowned Voice of Chicago. Under the leadership of President and Artistic Director Josephine Lee, Chicago Children’s Choir’s mission has been elevated to a world stage, using music to create global citizens and revolutionizing the youth choral arts.

Q Brothers Collective
Q Brothers are internationally known for their hip hop adaptations of the classics. These productions include Othello: The Remix, Funk It Up About Nothin' (Much Ado) and Q Gents (Two Gents). The collective has grown beyond founding members GQ and JQ, to include Jackson Doran and Postell Pringle. Together, Q Brothers Collective has written and composed Q Brothers Christmas Carol, ms. estrada (Lysistrata), Rome Sweet Rome (Julius Caesar), I Heart Juliet (Romeo and Juliet) and Long Way Home (The Odyssey). You can also find them at Lollapalooza and Austin City Limits, performing and teaching kids to love rhyming as much as they do. Learn more at QBrothersOfficial.com.