Earth is Moving Toward Extinction

A newly released book by Cary Allen Stone, SEEDS: The Journey Begins, offers up an eye-opening glimpse into the future. It's a story that is as relevant as today's​ headlines. 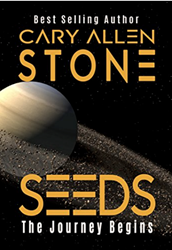 SEEDS: A Story as Relevant as Today’s Headlines.

Earth is Moving Toward Extinction.

What Can Be Done About It?

Phoenix Author Cary Allen Stone offers up an eye-opening glimpse into the future with his Seeds: The Journey Begins.

With fresh stories of UFO’s appearing almost nightly on the news one has to wonder “what if”.

At 30,000 feet peering through the cockpit window of a corporate jet into an explosion of stars against the velvety darkness, Pilot and author Cary Allen Stone pondered the imponderable.

What’s out there? What do the planets foretell? Are we on earth moving toward extinction? If so, what can be done about it?

The award-winning author spent 40 years flying corporate jets and airlines, but he didn’t get around to the big “what if” question until he had retired and had written noted thrillers and a true crime book.

But the unknown beckoned, and now he is available to dive into the black hole of “what if” to answer questions about the otherworldly and its implications for mankind.

What if—given all the pollution, wars, climate change—earth had reached the point beyond repair, and there were only one real means of survival.

In other words, survival meant, in essence, to “‘slip the surly bonds of earth to touch the face of God” as civilization travels to a distant moon of planet Saturn to plant the seeds of a new beginning.

Stone is a fascinating interview. He joins the star class of those who have found and succeeded in “Second Acts” after retirement.

He is in demand as a professional voice for radio commercials and as a stand-up comedian. Where did he get his incentive to write both fiction and non-fiction?

He was encouraged by one of his frequent passengers aboard the jets he flew: The famous film director and producer Ridley Scott, who launched his own career with a sci-fi project, Aliens.

Cary is available for interviews.

Seeds: The Journey Begins is available at https://www.amazon.com/dp/B076XY1GR4