Developer of Solver, risk analysis and data mining tools for desktop Excel has moved to the cloud and online learning in a big way. 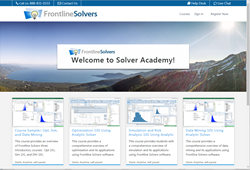 Frontline Systems, developer of the Solver in Microsoft Excel, has launched Solver.Academy, its online learning platform for predictive and prescriptive analytics, for customers generally. At the same time, Frontline announced that it has surpassed 500,000 users of its cloud-based advanced analytics tools, aimed at spreadsheet-literate business analysts who aren't expert data scientists.

"We've helped hundreds of thousands of non-experts build and solve advanced analytics models," said Daniel Fylstra, Frontline's founder and President. "We're closing the 'skills gap' that would otherwise limit deployment of analytics methods in business." In addition to the 500,000 users of its cloud-based analytics tools, Frontline's software for desktop Excel has been used by more than 500,000 MBA and undergraduate business students, over more than 10 years, to learn modeling and analytics in university courses.

An oft-cited June 2011 study from McKinsey Global Institute estimated that the U.S. faced a shortage of "1.5 million data-savvy managers" to make analytics-based decisions; Frontline believes it has materially contributed to easing this shortage.

Frontline Systems moved early to the cloud by launching its Solver -- a prescriptive analytics tool -- for Excel Online in July 2013, followed by Solver for Google Sheets in October 2014. More than 200,000 users have adopted these analytics tools (according to data from Microsoft and Google). Risk Solver®, XLMiner® Data Visualization and XLMiner Analysis ToolPak, also launched in 2014, have been adopted by another 200,000 users. In March 2015 Frontline launched RASON® -- RESTful Analytic Solver Object Notation -- for developers, likely the first cloud-based REST API service for prescriptive analytics. And in fall 2016 Frontline launched AnalyticSolver.com, its own cloud-based platform for optimization, simulation/risk analysis, forecasting and data mining, widely used by business students -- now with 100,000 user accounts.

Solver.Academy Based on Open edX

Frontline has now launched Solver.Academy, its online learning platform, formerly available only to select customers, for general use. Built on Open edX -- the software that powers the edX.org MOOC (Massive Open Online Course) platform, Solver.Academy offers self-service courses in data mining and predictive analytics, Monte Carlo simulation and risk analysis, and mathematical optimization. Each course is divided into six "weekly sections", but these can be taken at the learner's own pace. Each section includes video lectures and a quiz, and each course also includes a mid-term and a final exam, where learners must build and solve real models to pass. Frontline offers certificates for course completion, but the greater value for many course-takers is immediate application to their own business problems.

In February 2017 Frontline launched Analytic Solver® Basic, a special "learning" version of its comprehensive Excel-based software for predictive and prescriptive analytics, priced at just $250 per year, which has proven extremely popular. In conjunction with the Solver.Academy launch, Frontline is making available a special 140-day Analytic Solver Basic Course License -- sufficient to complete all the exercises and exam questions in the Solver.Academy courses -- for just $100, and a special "bundle" of three courses at an introductory price. By doing so, Frontline expects to make an impact on the analytics 'skills gap' beyond its own product offerings.

Frontline Systems Inc. (http://www.solver.com) is the leader in analytics for spreadsheets and the web, helping managers gain insights and make better decisions for an uncertain future. Its products integrate forecasting and data mining for “predictive analytics,” Monte Carlo simulation and risk analysis, and conventional and stochastic optimization for “prescriptive analytics.” Founded in 1987, Frontline is based in Incline Village, Nevada (775-831-0300).