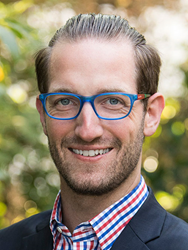 I'm honored to be given the opportunity to contribute to the future of this technology that can transform the lives of the more than 900 million people globally who are expected to have disabling hearing loss by 2050.

It was announced this week that the United States National Committee (USNC) of the International Electrotechnical Commission (IEC) has appointed Thomas Kaufmann, Founder and CEO of OTOjOY, to serve as a subject matter expert in working group WG 22, Hearing loop systems and equipment, of IEC technical committee TC 29, Electroacoustics. The committee, now comprised of 9 members and its convenor, develops and publishes international performance and testing standards related to hearing aids, audiometric equipment, sound level meters, and assistive listening equipment.

Kaufmann has been working and innovating in the field of audio frequency induction loop systems since 2012. OTOjOY was one of the founding partners of the Loop California non-profit public awareness campaign, for which the company was honored with the 2013 Santa Barbara Mayor's Award for Outstanding Effort. OTOjOY received a 2018 CES Innovation Award, a 2018 Edison Award, and a nomination for a 2018 Global Mobile Award. Kaufmann was also named a finalist for a 2017 Arizona TechTalent Award.

"As Convener of WG 22, I warmly welcome Mr. Kaufmann to the committee," said industry veteran, John Woodgate. "I am very familiar with Mr. Kaufmann's dedication to help people with hearing difficulties, and I am impressed by his drive and enthusiasm. I am sure he will be a valuable addition to the team."

TC 29/WG 22 recently had no formal U.S. representation until the American National Standards Institute (ANSI) and the Acoustical Society of America (ASA) nominated Kaufmann earlier this year. In the United States, adoption of hearing loop technology has been increasing rapidly, thanks to grass-roots advocacy groups and support from the Hearing Loss Association of America (HLAA).

"I'm honored to be given the opportunity to contribute to the future of this technology that can transform the lives of the more than 900 million people globally who are expected to have disabling hearing loss by 2050," Kaufmann said. "The IEC 60118-4 standard plays a critical role in ensuring that hearing loop systems worldwide perform optimally and provide the best possible listening experience for the user."

Unaddressed hearing loss poses an annual cost burden of 750 billion dollars to the global economy. 1.1 billion people between 12 and 35 years of age are at risk of hearing loss due to recreational noise exposure.